Little did Finnley Newnham know what was in store when he joined his dad and his uncle for a trip to a southern syndicate water.

Well, I guess it all started with my dad, Roger and my uncle, Thomas Duncan-Dunlop, during a two-night blank.

Coming into the third night my dad asked the head bailiff if I could do a guest session. He told me it was no problem as long as he fished next to you or my uncle. So that was settled and my dad came home to pick me up with my gear, bait and refreshments. Once everything was loaded up we headed back to the lake. As usual, me and my dad were chatting about the lake, a southern syndicate water, and what it had to offer. 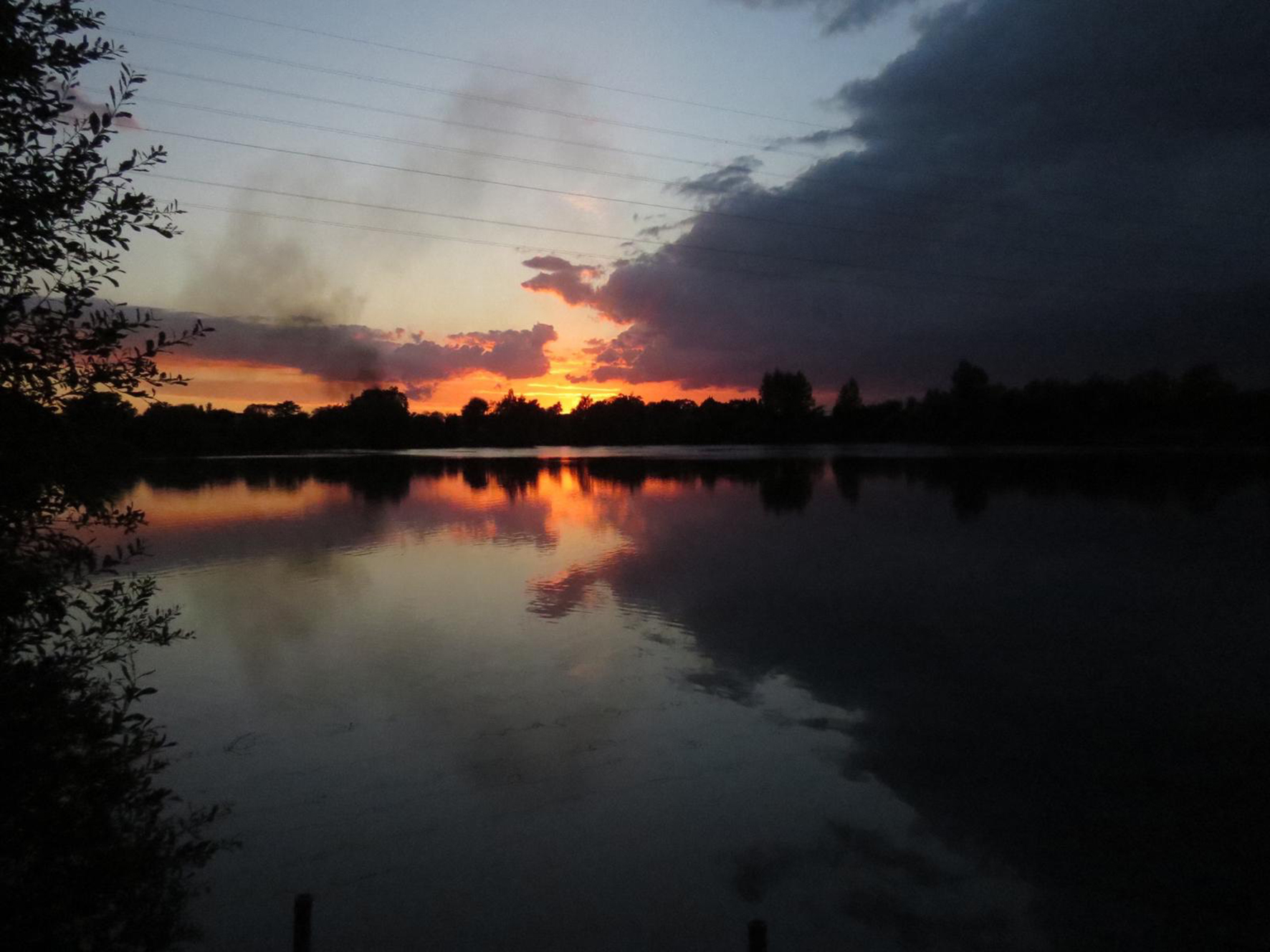 Sunset over the syndicate water. Little did I know what was in store for me.

The venue is about 37 acres with a decent stock and a reasonable head of 30lb fish plus a few bigger surprises. Once at the water we unloaded the van and walked the gear round. Standing in my swim, looking out at the far distance, I saw a big dark storm-like cloud. This meant a rush to set up and get the rods out. Once the bivvy was set up it was just a matter of putting some baits onto rigs. As soon as the first rod went out the heavens opened and it was thunder and lightning for the next half hour. But once the clouds blew over and the rain stopped I saw my uncle and my dad and we chatted and had a laugh. I was really enjoying it.

While my dad was getting his rods ready for the night, my uncle and I were just having fun and dunking biscuits in coffee. Then I went back to my swim and wrapped my rods up. I knew where to go because my dad had fished this swim and caught, so it was obvious to target those spots. During the first night my dad fished in the swim I was in and had applied some bait. So I thought I’d go in with a light scattering, so as not to over-do it. I used a throwing stick to make a wide spread of bait – a Mainline prototype – so once my rods were in position I waited just until the light was fading and put out a kilo. My rigs of choice were a Ronnie rig with a size 4 RM-Tec Curved Shank hook and the 25lb stiff coated braid. Bait was a Mainline Pineapple Juice pop-up.

After sorting everything out and tucking into some grub, we were just watching the sun go down and the red sky that had appeared. The night passed quite quickly, but in the early hours, around 5am, I heard some alarms but they seemed faint so I thought I was just hearing things and went back to sleep. I woke up at about 6:30 and watched the mist on the water but when I walked up to my uncle’s swim I saw a retainer sling in the water. I walked up to my dad’s swim and he had nothing through the night. But as we were speaking his rod ripped off and he was in and I helped him net that fish. As I went to tell my uncle about my dad’s fish my dad got the rod back out and had another fish, the first one was a 31lb mirror and the second a 28lb scaly mirror. Once we got pictures of them we took some shots of my uncle’s fish and that was a 34lb common, a real minter.

After all the carnage, we settled down and had a nice bacon roll and a cup of coffee and began a slow pack down. I packed away my bag and dropped my bivvy so everything was ready just to load onto the barrow.

Just as I was about to see my uncle – with my receiver in my pocket – I heard a one-toner and sprinted back to my swim. The tip was bouncing, so I leant into it and immediately the fish dug its head in weed. I called my dad and uncle over and slowly walked back, gaining yard by yard of line. It was feeling heavy. When it was about 30 yards out I just saw this huge ball of weed.  I couldn’t really see the fish but my uncle was in the water ready with the net. As I eased it into the net my uncle said there was definitely a fish in there. I was over the moon but at that moment I didn’t know how big it was. My dad and I lifted it on to the mat and I sort of recognised the fish as one of the named ones called Starburst because my uncle has caught it before and I witnessed a previous capture. When she was on the mat my uncle assured me that it was Starburst and it was definitely over 30lb. My Ronnie rig was nailed in the bottom lip and the mouth on this beast was huge. After unhooking her the scales tipped round to a whopping 37lb 4oz. It smashed my personal best by around 7lb.

After weighing her we got the cameras out and took as many photos as we could get!

As usual, the bucket of water was tipped over my head and it still really didn’t really sink in. Then I got back in the water for some final shots before letting the beast swim away. 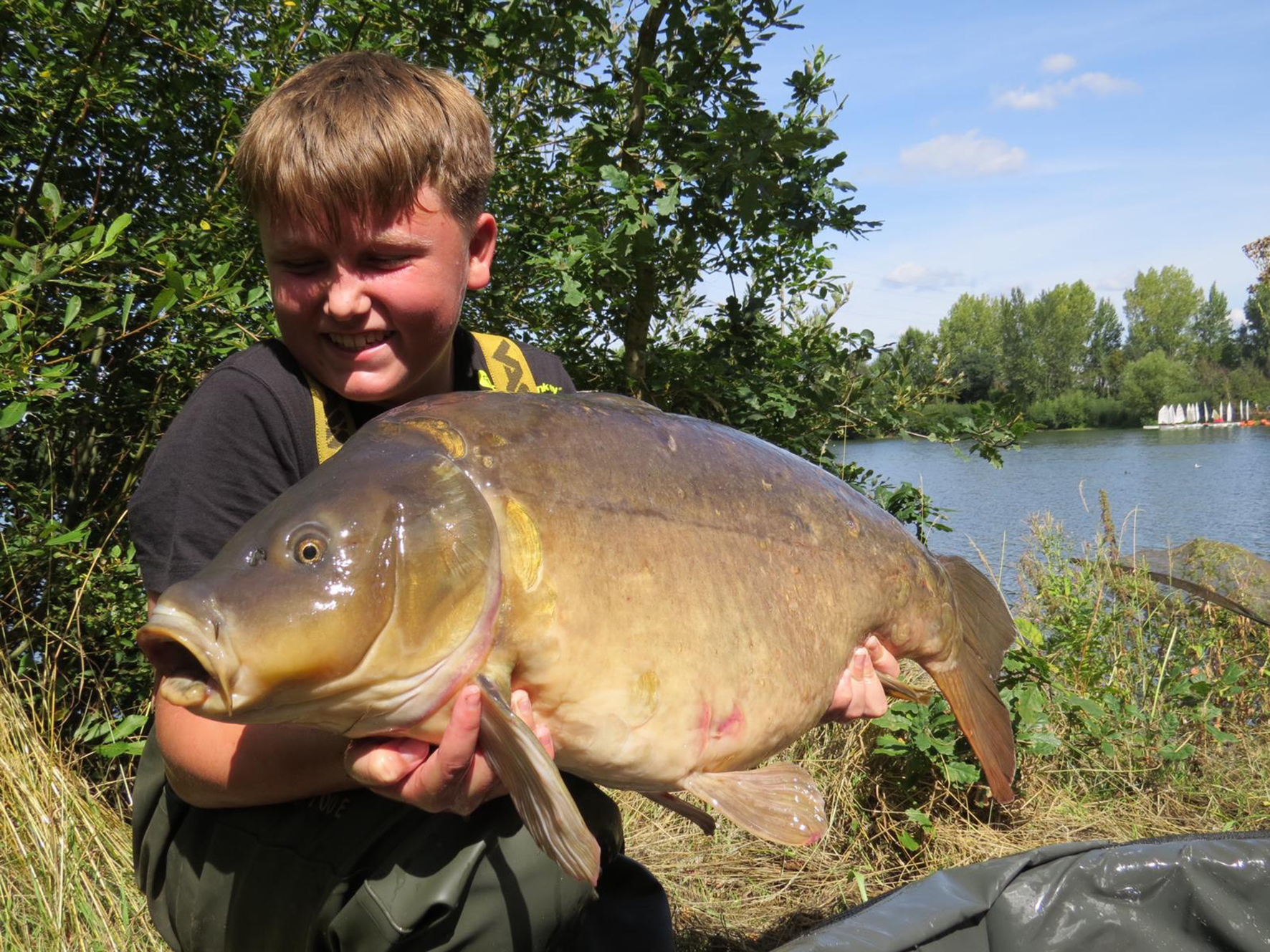 Lifting this one for the camera was a day I won’t forget in a hurry. 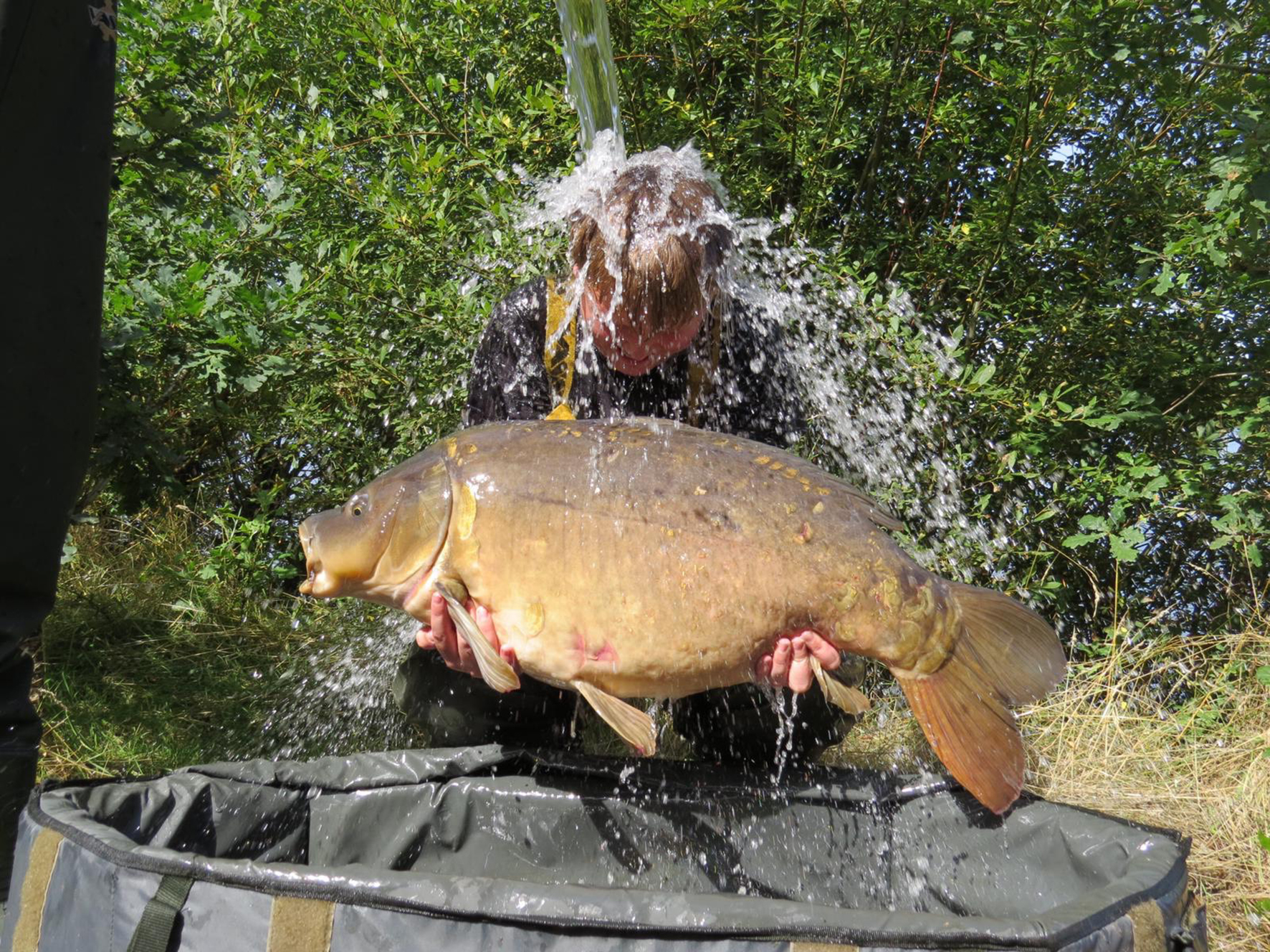 The ritual soaking after hoisting up my personal best.