THE AUTUMN OF DISCONTENT
Tim Childs

With the usual cooling late September weather still not in sight, my hot summer fishing on the northern mere continued as October crept even closer. My confidence tanks had been overflowing of late with the capture of two lovely upper 20lb mirrors on consecutive trips in the middle of a sweltering September. Now, with the autumn equinox behind me, I couldn’t see why my current run of successes should not continue. There where a few fish that were pinned on my wanted list and two or three of them fell to one angler during this period. He seemed to be getting things right.

The end of summer was in sight but the action continued. 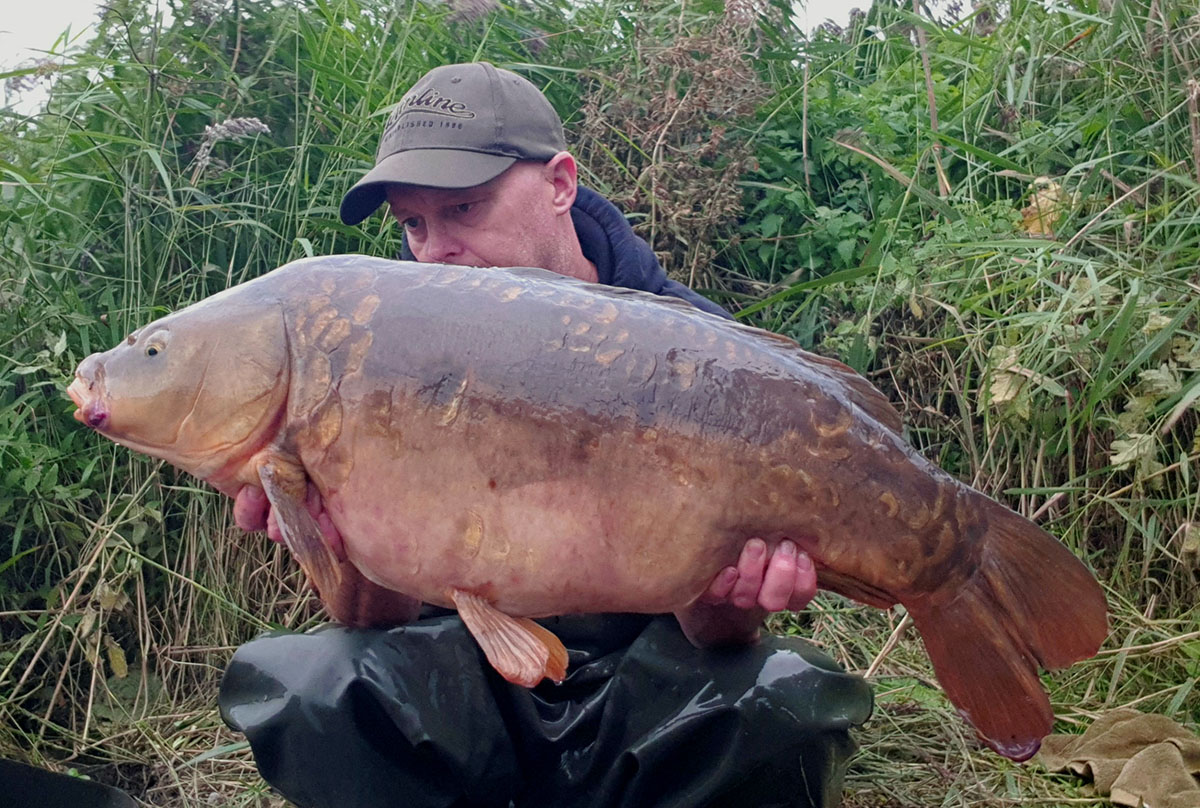 All was looking great for an autumnal finale, but little did I know that the next four or five weeks would turn into a complete blank month and October would leave me scratching my head as to why the bites had stopped. I have to admit I didn’t fish many nights during October, but the six or seven nights produced zero action. I wasn’t the only one who suffered as one or two anglers racked up more than 20 nights in the same period for very little return. The amount of natural food in the venue was still very high and the fish seemed to be gorging on them with complete disregard to anglers’ baits. I could have simply tried to bore one into picking up my hookbait by doing four or five nights every week, but I soon realised that the fish were simply preoccupied on the harvest and didn’t really care what we threw at them! 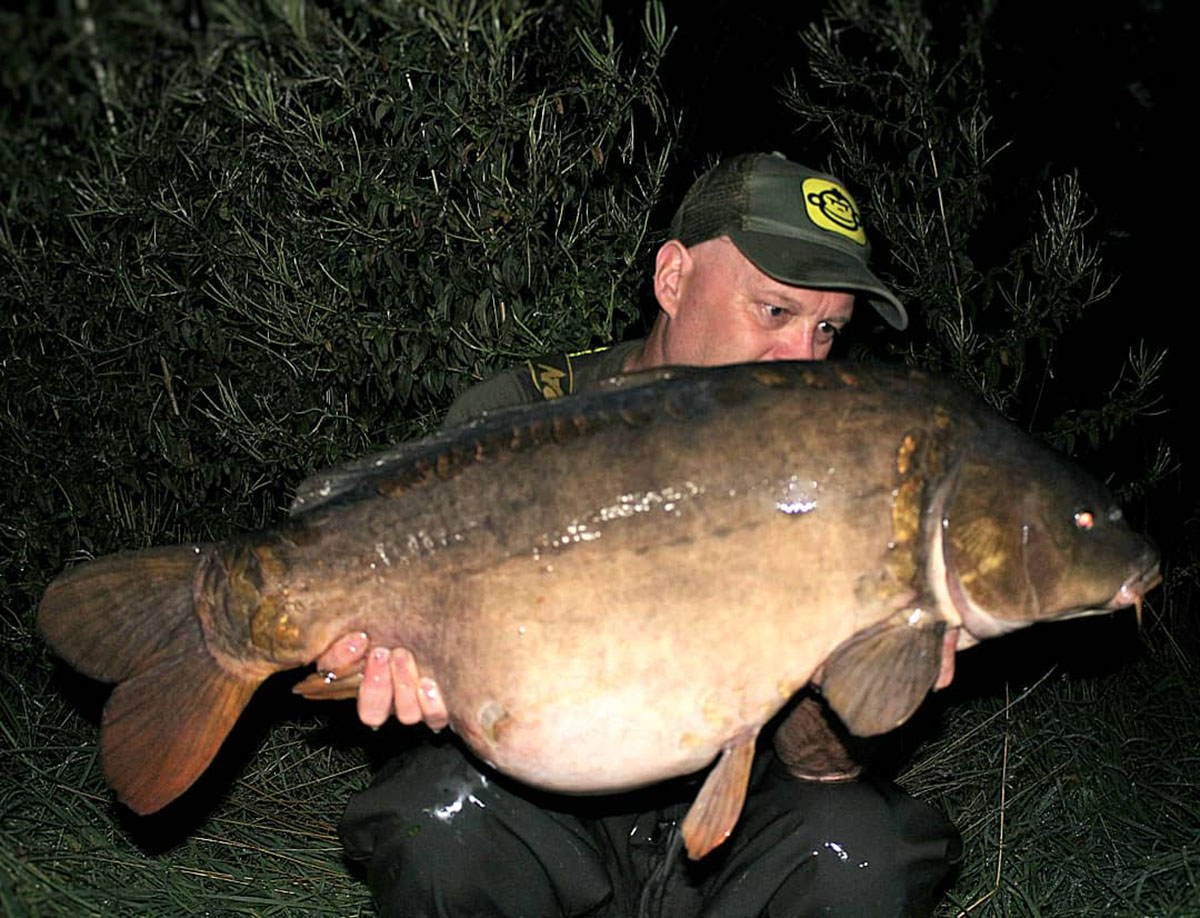 A near 30 pounder from shallow water. 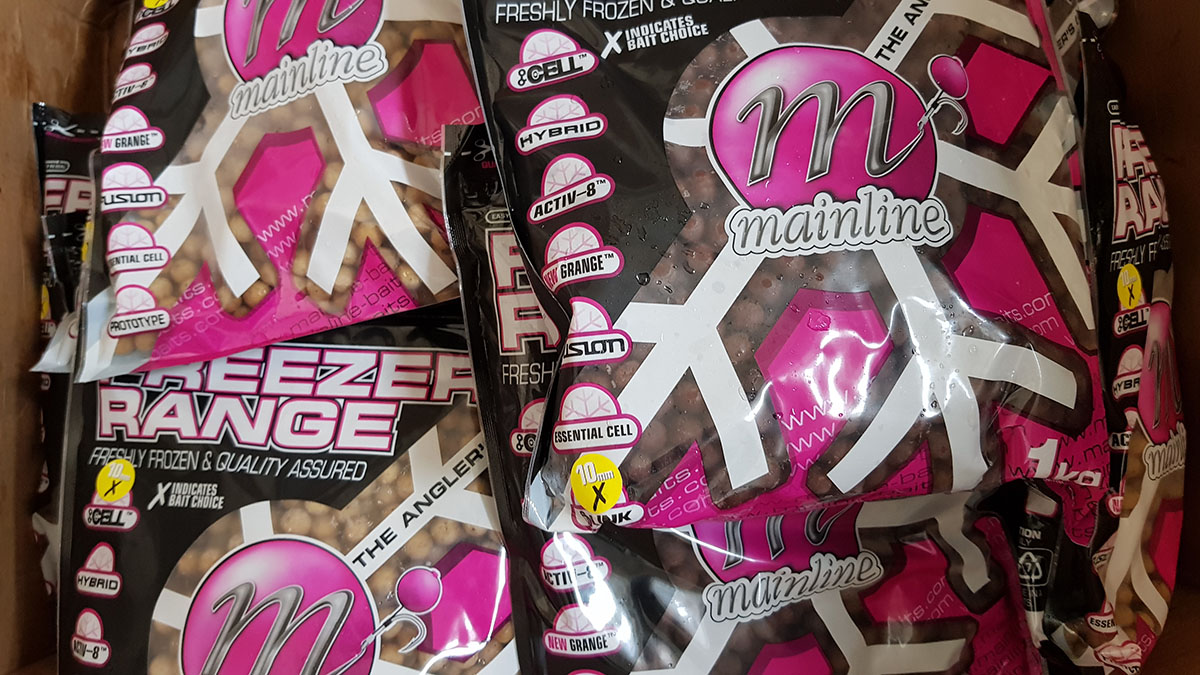 Mainline boilies always in my amoury 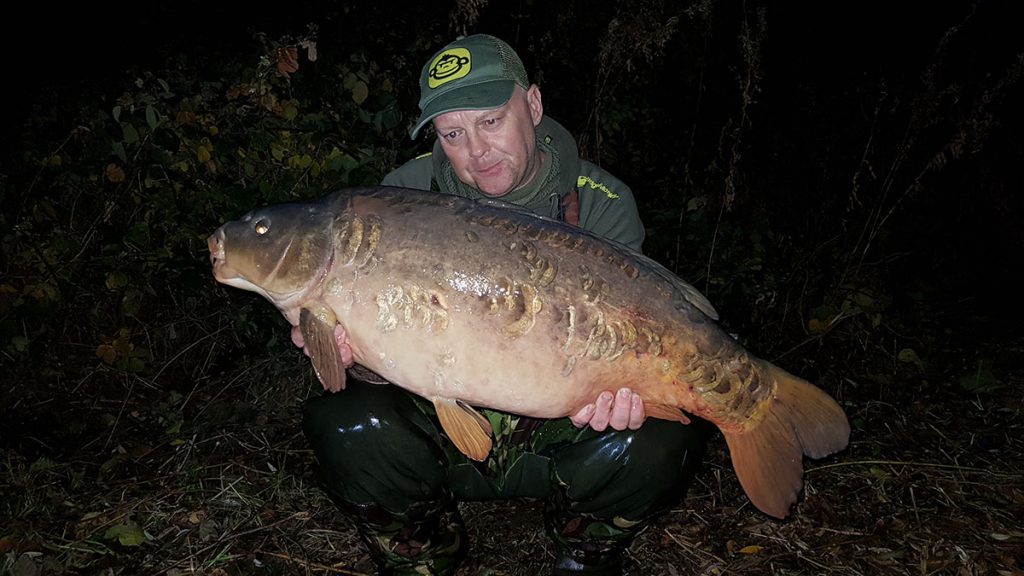 By the end of the month I had decided enough was enough. Whilst some may see that as a cop out, I had other waters to target that were at least fishing a little more consistently. I usually love the autumn period on the mere, but for one reason or another this year had been a bitter disappointment and it was with a mixture of sadness and relief that I said goodbye to the venue, until next year of course. With that in mind I immediately switched to another large north west club venue that had at least produced a few fish in recent times. 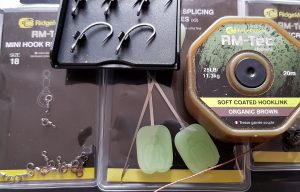 The change of venue at the start of November brought instant and explosive results. After just five or six short sessions fish of 19lb 8oz, 24lb 2oz, 24lb 8oz, 29lb 8oz, 29lb 8oz and a beauty of 38lb had found their way into my net. This action was a great relief after my recent dry spell and, despite losing another four fish during this period, I was more than happy with the results. Tactics were simple but very effective. Small  hand-rolled fruity hi attract pop-ups fished over patches of  hempseed and SS3 blend mixed with maggots, sweetcorn and 10mm and 15mm chopped Mainline The Link  and Cell boilies fished to an open water spot, produced some great after-dark action. My favoured Mk2 Slip D pop-up rig utilising the size 6 RM-Tec Curved Shank hooks and some of the new quality terminal tackle items from RidgeMonkey kept working well and a switch to the RM-Tec Fluoro main line ensured I was fishing as effectively as possible. I was buzzing with excitement and just knew there could be more to come. The weather was mild and I just had to get on the bank as often as possible, keep applying the bait to the same area on a little and often basis and hope another couple of chunks would come my way. 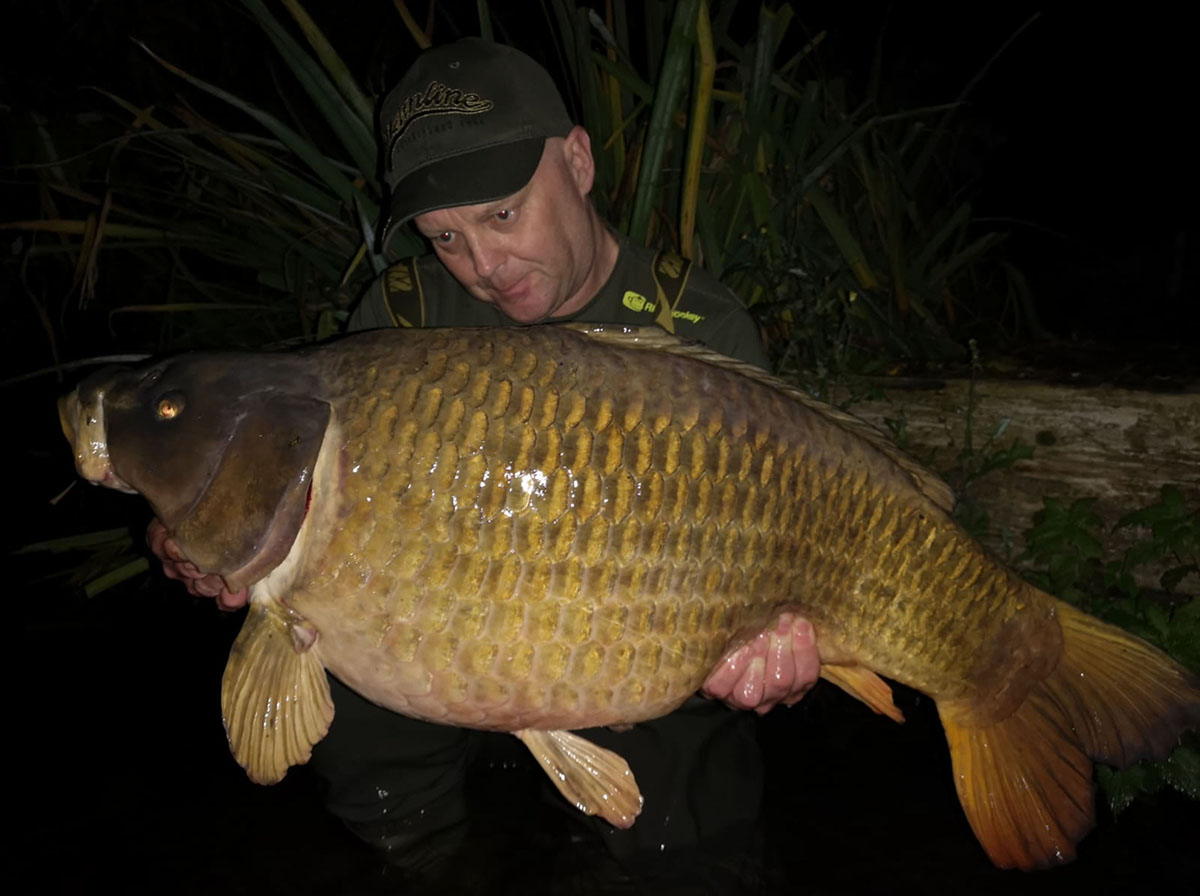 This night time ghost common pulled the scales round to 38lb! 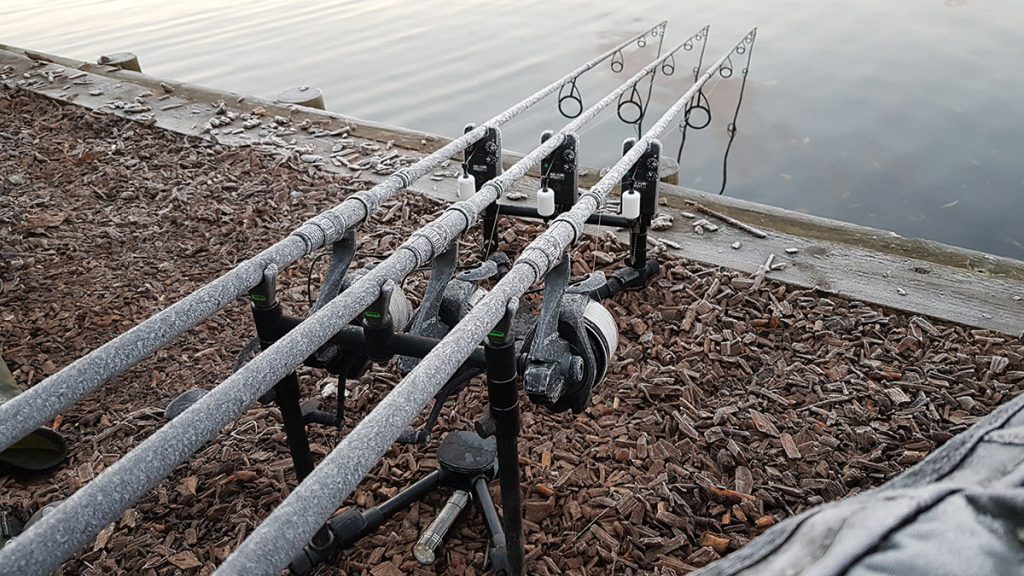 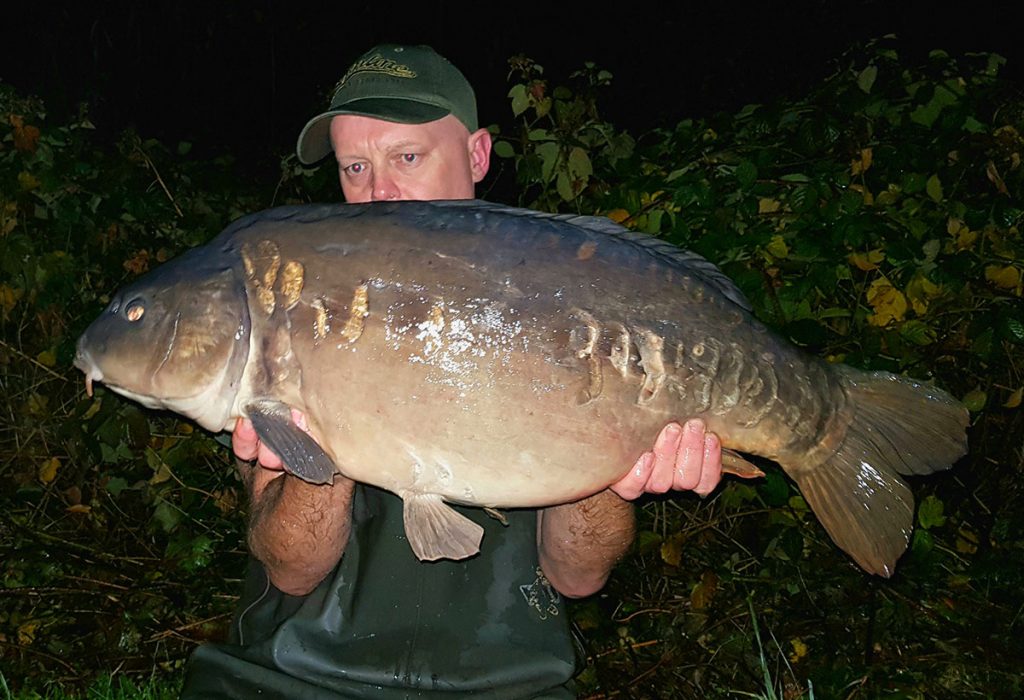