A Summer of Fun

With the first half of 2018 somewhat busy my angling had taken something of a back seat for the first 5 or 6 months.

With just a couple of odd days fishing in May and June I had been lucky enough to bag a few nice fish to over 25lb on the few short trips I had done. It wasn’t until early July that I managed to get out and do some proper fishing and with the warm summer weather with us it was time to start hunting for something a little bigger. 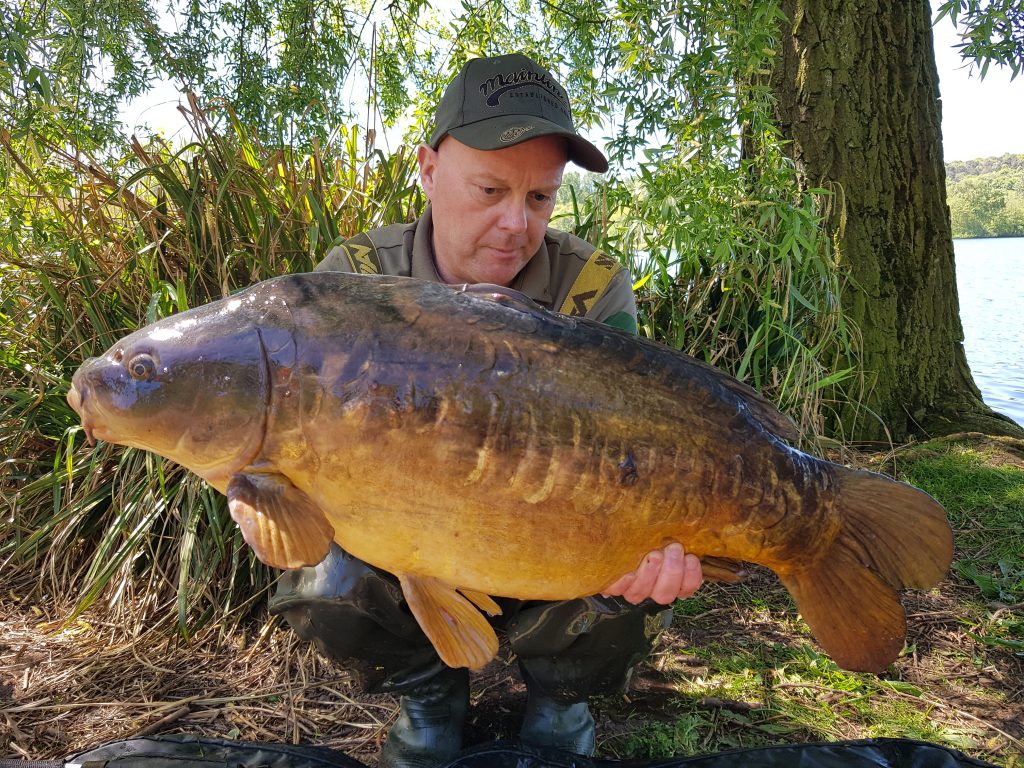 A chance conversation with a good friend suddenly found me heading off to a 15 acre private gravel pit and with the chance to do a few nights as his guest, I grabbed the opportunity with both hands! The trip was to be a 48 hour session and after a good look around the venue I noticed a few carp displaying their presence in one particular area and was soon set up on the end of a warm westerly wind right on the fish! The venue is particularly clear and weedy and with that I mind I had spooled up with the RM Tec Flurocarbon mainline in 15lb bs a line that I am very confident in and know it would be perfect for the job. Tactic wise I chose to fish solid PVA bags at short range and after spodding out a good mixture of hemp, snails, crushed peanuts and seed mix along with a good helping of chopped and whole Mainline Link and Mk 1 boilies, the traps were set. 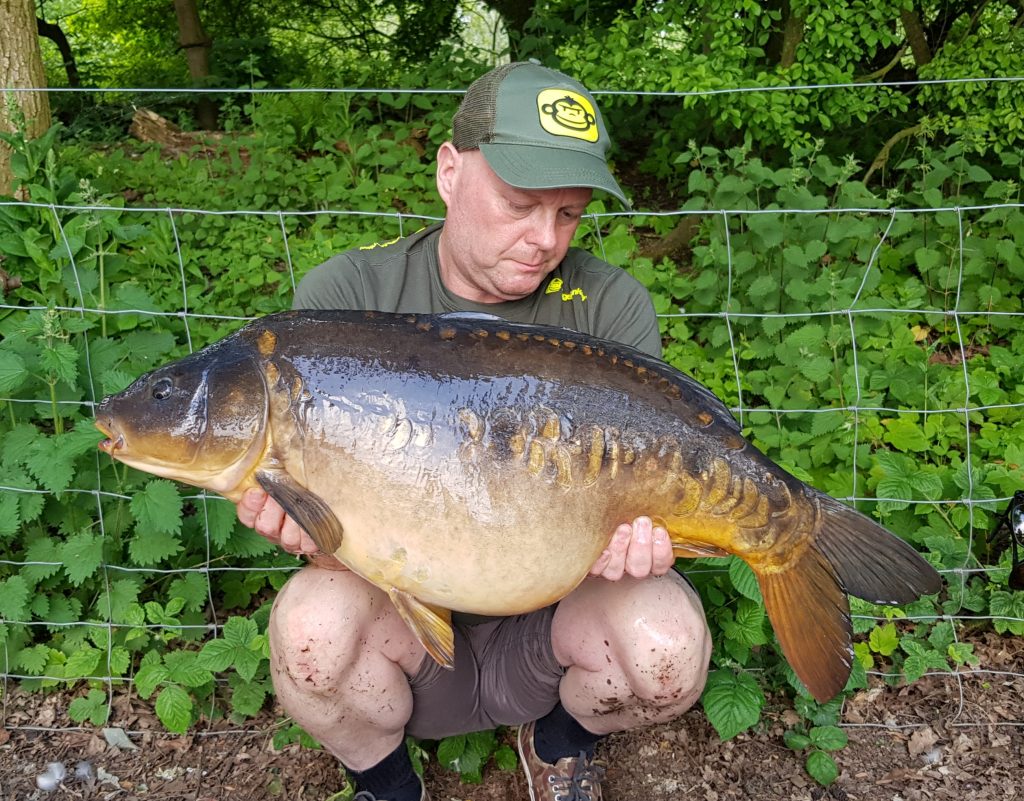 This chunky mirror was nailed on the RMTec size 6 curves.

The first night was quiet but the next day the right hand rod burst into life, after a good fight and with a little weed attached to my line I managed to bundle a lovely dark looking mirror into the net. At just over 26lb it was a great start, despite catching this lovely mirror I suddenly decided to move swim on a hunch, unfortunately this time the hunch didn’t pay off and the next 24 hours resulted in no more fish for me. I had enjoyed the trip immensely and surprisingly managed to get an invite once more just a couple of weeks later. This time I was really keen and with an idea formulated I set up on the opposite side from the first session again after seeing a number of fish show. 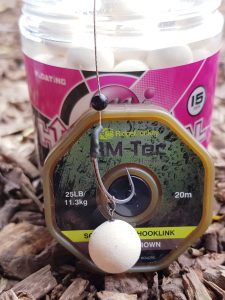 I applied another good helping of bait, over 50 spods full on one spot, a clear area of clay behind a big bed of thick weed. A good mixture of hemp, seeds, tigers and chopped peanuts from Cheshire Particle along with a couple of kilo’s of boilies was soon deposited.  A change of tactics this time found me fishing standard leadclip arrangements with 25lb RM Tec green soft coated hooklinks of around 12 inches long. A size 6 curve shank and my favored slip D pop up presentation finished the rig off perfectly.

The first bite came just after dark in the form of a hard fighting 26lb common, after re positioning the rod I climbed into bed to catch up on some much needed sleep! The next morning dawned quiet but a stiffening wind had my confidence tanks still full. At just after lunch the middle bobbin pulled up tight to the blank and then the line slowly pinged from the clip. The line was super tight and something told me there was a big old carp attached to the end somewhere out in a forest of weed! Winding down the rod arched over and the slow steady fight began. True enough there was a huge bed of Canadian pondweed attached to the line and after much pumping and steady pressure the mass of weed came closer and closer until it was almost at my feet.

Suddenly a huge vortex appeared and the line shot out from the weed that lay in the edge! There was a big carp deep down there somewhere! I frantically ripped the weed from my line in a desperate attempt to gain direct contact with the fish. Luckily the weed cleared a little and then the fight under the tip began.

The RM Tec Flurocarbon my favoured all round line.

After another 5 minutes or so the fish began to tire and as the leadcore popped up a huge golden common soon lay on the surface, with a scoop of the net she was finally mine. I knew straight away this was something special and with a little help I weighed the lovely common at 43lb 12 oz, a new personal best common and one of the main targets in the lake! I was over the moon and packed up there and then quite happy with the result. 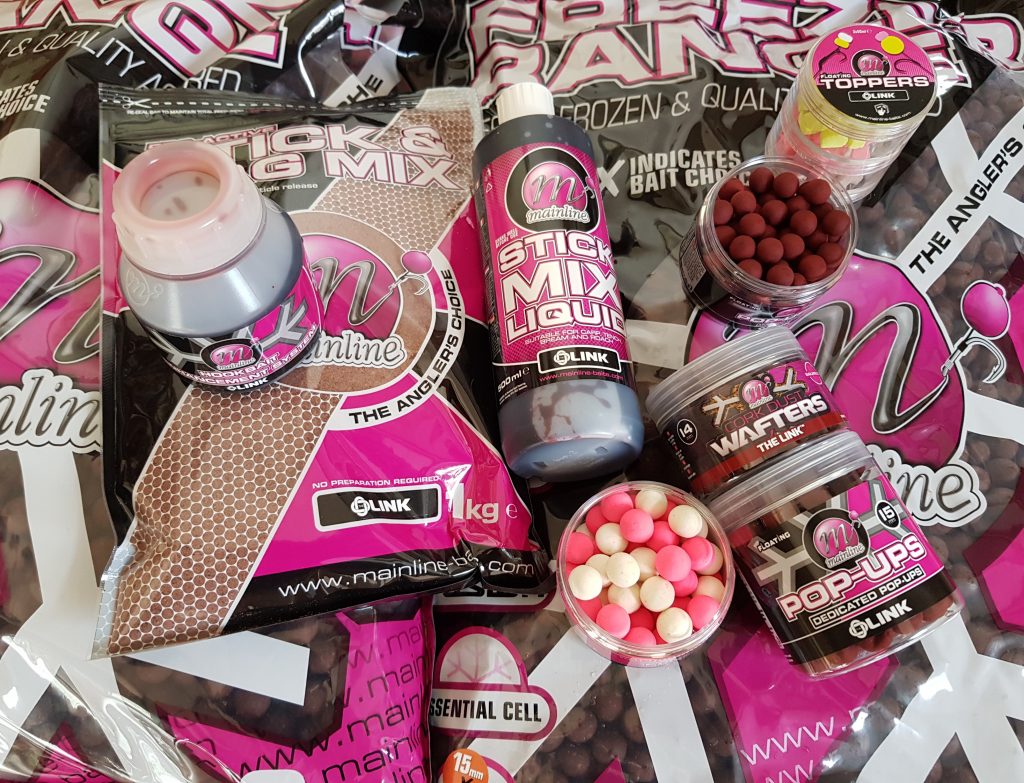 After a great start to the summers fishing this year with the capture of a new personal best common, I decided to concentrate my efforts once more back on the much loved 40 acre Cheshire mere, a venue that I had become very fond of other the last few seasons. Despite capturing a number of the lakes lovely carp over the years there where still a few that I really wanted to catch including at least 5 known 30lb carp, still big fish in the Northwest.

With that in mind I set about structuring a plan for the months of August and September. The hot weather continued and not being the biggest fan of sizzling hot weather I decided shorter over night trips may be more suitable.  Bait was never going to be an issue as with a freezer full of quality Mainline boilies and a good helping of Particles and tiger nuts I had everything I needed. I got off to a great start  on my first couple of trips back on to the venue by landing one of my main targets in the shape of a chunky rotund mirror of 33lb. It was a great start and I was made up with this capture. 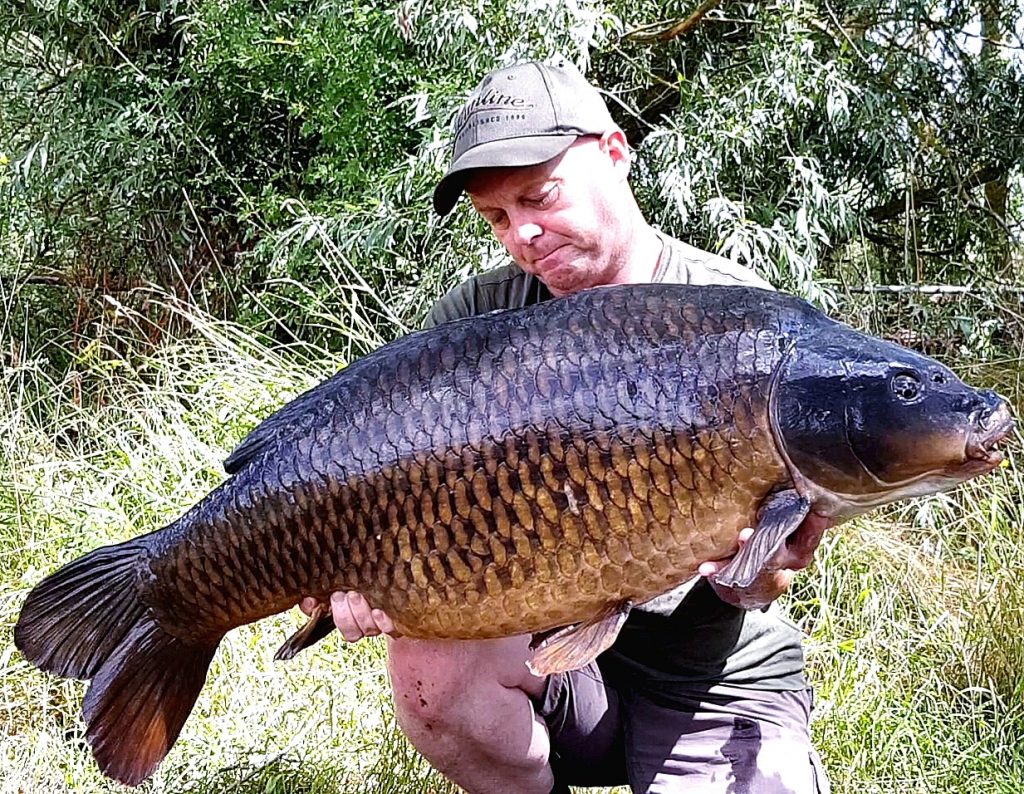 A true English 43lb 12 oz common, over the moon with this one!

The next few trips seem to go from strength to strength and even though I didn’t catch on every trip I was starting to piece together a picture of both the fishes movements and their captures. September loomed closer and with the weather still exceptionally warm the fishing seemed to flourish. I love this month,the kids are back at school and I had a little more free time and intended to make the most of it. I managed a lovely few captures during the first half of the month including two superb linear mirrors that are growing well along with another chunky fat bellied mirror of 29lb. 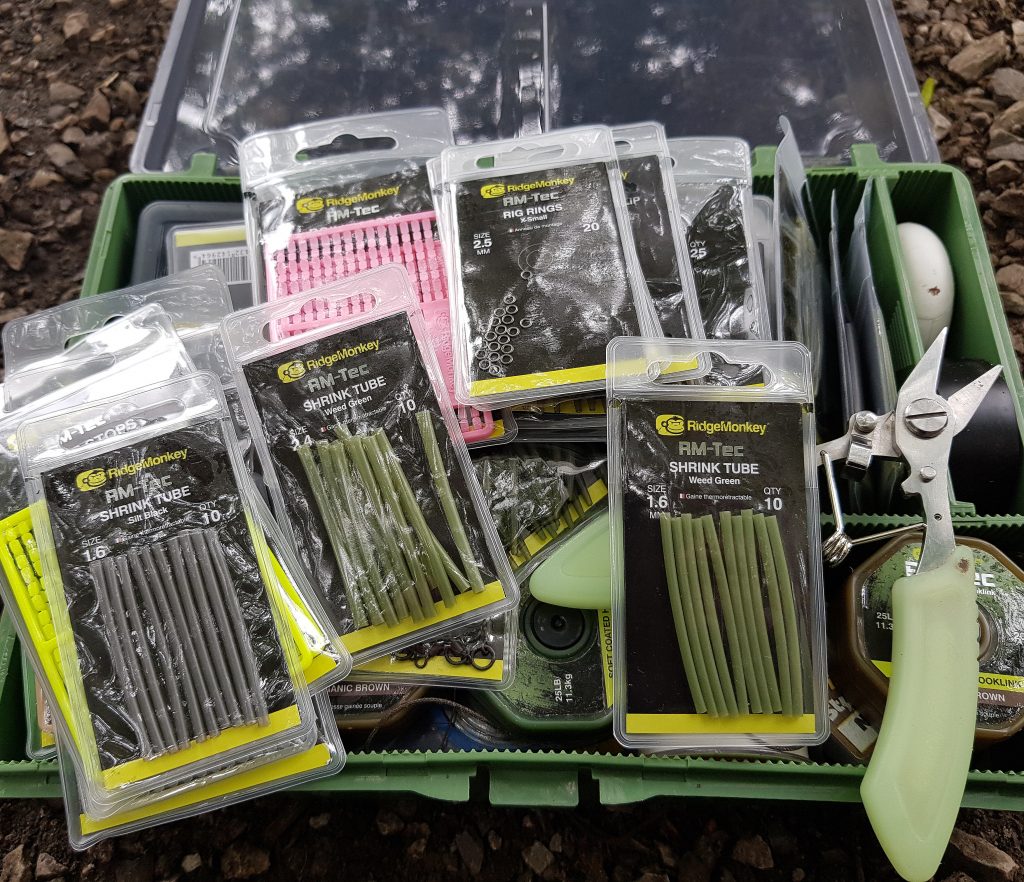 Tactics varied from session to session depending on the choice of swim and the fishes moods. Whilst some anglers seemed to be doing the same thing week in week out, I chose to approach my tactics on how I felt best suited the angling situation. One trip I may have applied plenty of hemp,tigers and chopped boilies to a certain spot, whilst the next session i may have been fishing PVA boilie stringers over a few whole baits applied with the catapult or throwing stick. It really did depend on the fishes moods and location. 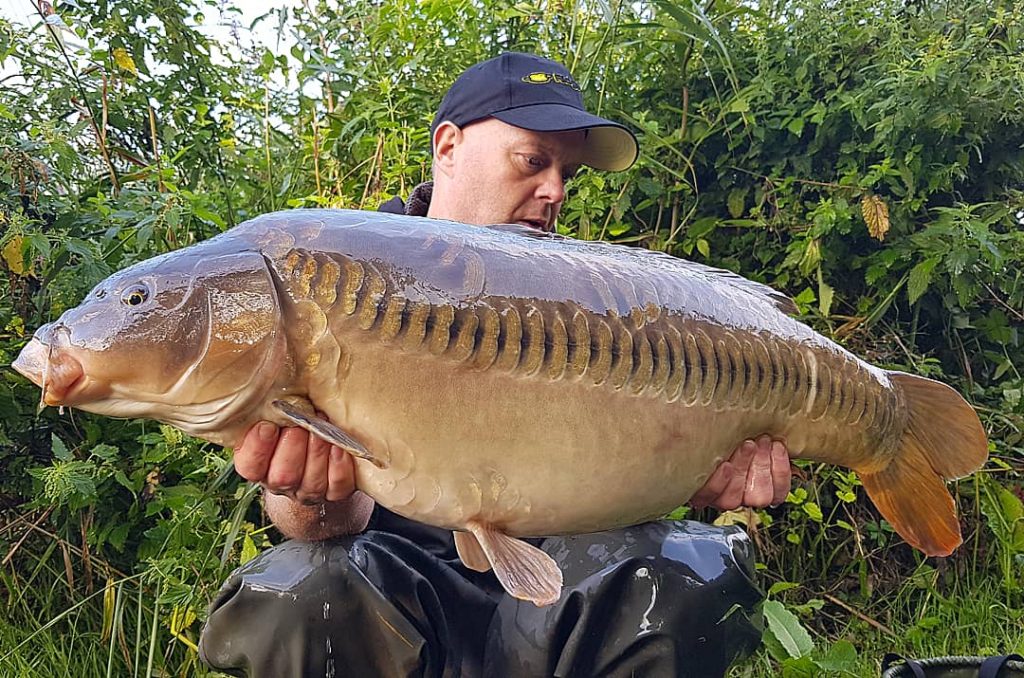 This adaptable approach seemed to pay off as by the end of the month I had managed a dozen or so fish including some lovely mid to upper 20lb mirrors and quite rare ones by all accounts. The long extended summer seemed to have done the fish the world of good with many of them 2-3lb up in weight and looking in superb condition a credit to the venue. 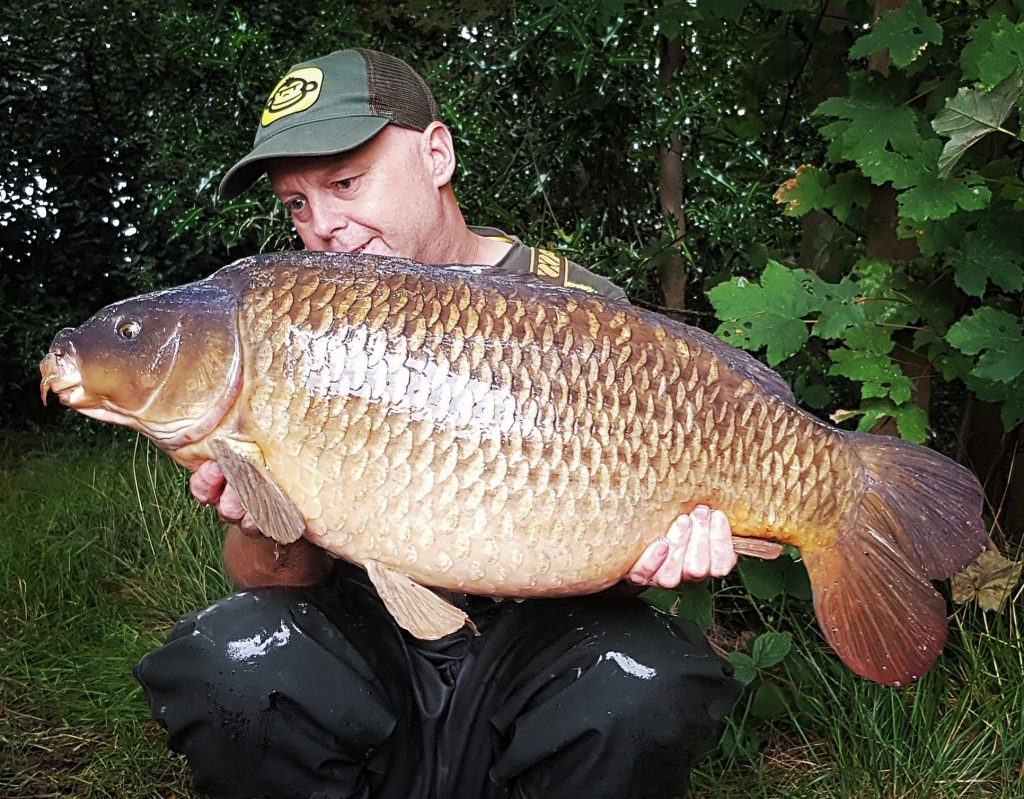 The autumn equinox is a great time of the year and with the big Harvest moon upon us my summer fun is coming to a close and my autumnal tactics will be brought into play. When it comes to rigs and presentations I alter very little on this venue. A 12-14inch length of soft coated hooklink like the 25lb version from RidgeMonkey coupled with a size 6 curved hook and a kicker or shrink tube line aligner has been perfect for my needs. The Slip D pop up arrangement works fantastically and has accounted for over 100 20 lb fish and a number of 30s in the last few seasons I have used it. With this in mind I see little reason to change as it simply works for me. 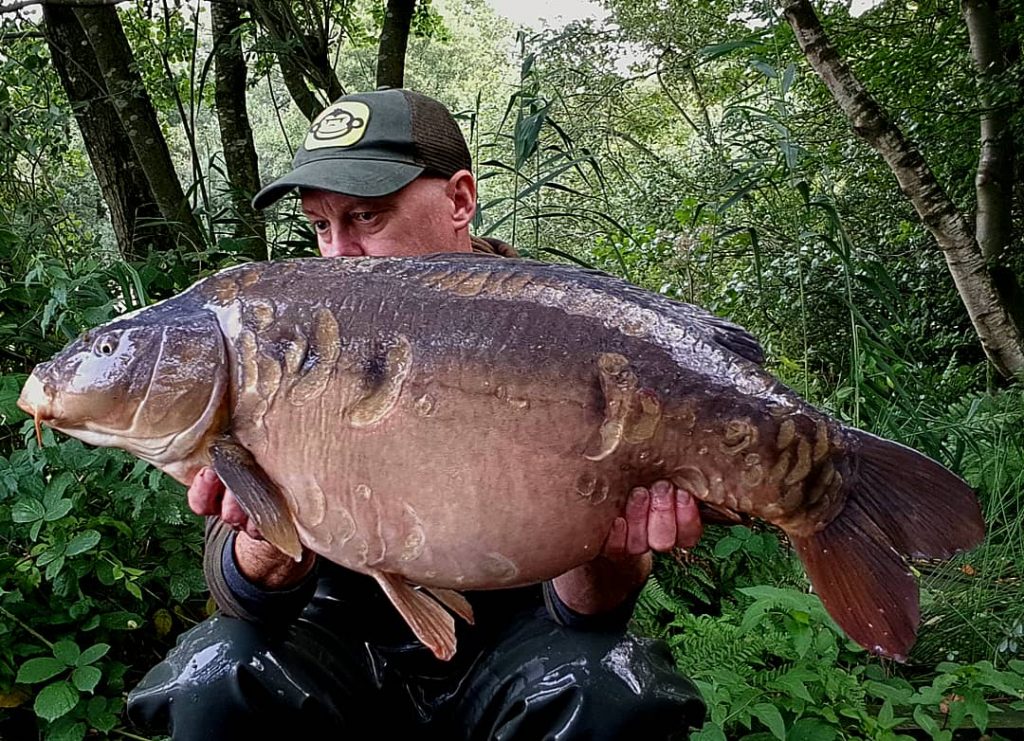 What a beauty to end the summer with.

My plans for the next few weeks are to carry on doing much of the same and certainly until mid November I will be concentrating on the one venue, with a mild few weeks ahead who knows what is in store and may find itself sat in the bottom of my landing net! Till next time…