I arrived at Holme Fen for a welcome break from my regular angling and, with a draw at 11am, I had just over an hour to walk the lake and choose areas I thought would give me a good chance of a bite.

The lake was quiet but there was one area which drew my attention, a swim known as Party Point. The area controlled the central zone of the venue and I felt this would give me a good chance of intercepting fish as other anglers set up and hopefully keep the carp moving.

Luckily, I came out first in the draw. As you can imagine, the gear was loaded and off I went to Party Point.

The swim was a double and as good friend and fellow RidgeMonkey team member Sean Mayo had also booked a 48-hour session. I chose the right side which gave me access to open water on the back of a cold north easterly and Sean happily settled in next door.

I chose to fish an area at about 70 yards and proceeded to bait with a mixture of Mainline’s The Link, Active 8 Meat and a Hooked on Baits Blitz spod mix. I put everything through the Advanced Boilie Crusher to leave me with a spod mix that would hopefully keep the carp grubbing around on the spot and ooze plenty of attraction and scent throughout the water column.  After getting the majority of the mix on my area, I finally got the rods settled at about 2pm. I had chosen to fish all rods on the one spot and opted for blowback rigs utilising the RM-Tec 25lb soft coated hooklink and size 6 Curved Shanks with 12mm The Link cork dust wafters as my hookbait.

To say it was quiet was an understatement. The rest of Monday passed by quietly and so did most of Tuesday. That was until the afternoon when the bobbin on the right-hand rod pulled up tight. As I leaned into the fish the rod took the strain and although the fish did not bolt it began to plod and take line with each lunge. After what felt like an age, and after slowly retrieving line whilst the carp did its best to rid itself of my hook, I slipped the net under what I can only describe as a unit!

The scales stopped at 51lb 3oz and I was blown away. The fish was wearing its autumnal tones of brown and the golden pinprick scales made it a worthy capture! 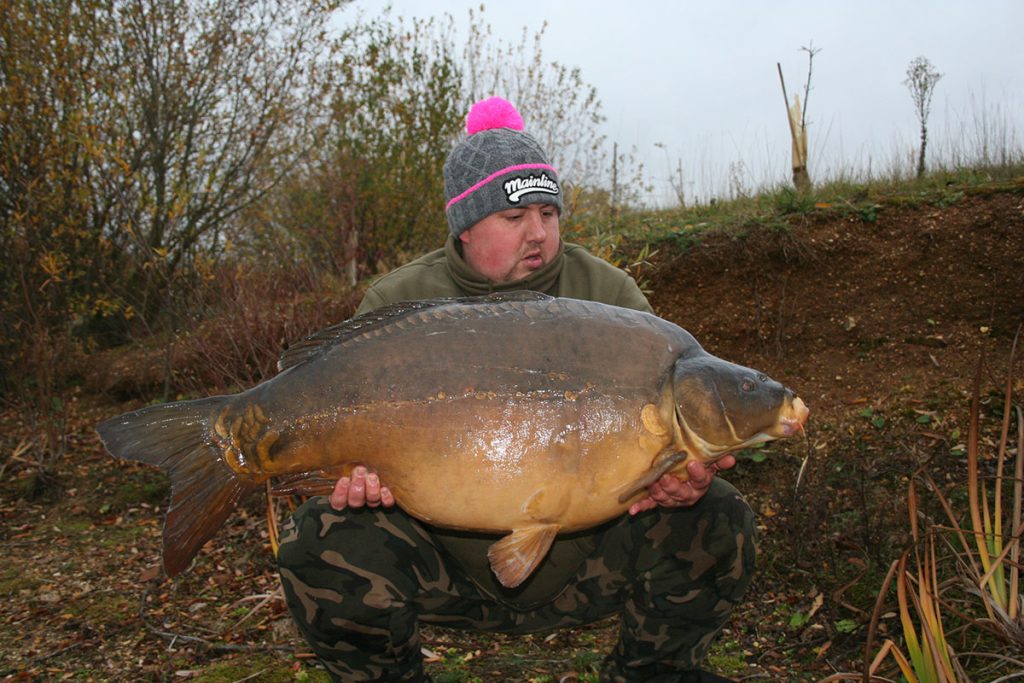 Sadly, all good things come to an end as just before dark on that Tuesday, another angler moved into the swim on the opposite side of the bank down to my right which would cut me off from the spot I was targeting.

Sean was due off the next morning, and after enjoying a bountiful session himself, a story which is his to tell and one I am sure he will recount someday, he kindly offered to swap sides in order to preserve my week’s fishing (thanks Sean).

At about 10.30 the following morning Sean left so I chose to explore the water from what was his side and targeted an area at around 120 yards. As the mix had worked, I was confident in it so decided not to change anything and proceeded to bait the area with 15 Spombs.

It didn’t take long until I received the first take from the new spot. It was at around 11:30am when a 30lb mirror slid over the net cord and after a few shots she was returned and, with a fresh hookbait attached, out went the rods. I didn’t have to wait long and after a spot of lunch it must have been around 3pm when the same rod was away once more.

Right from the off I knew this was a better fish, even at range it stayed deep all the way in. It never surged off but did send oily boils to the surface. Then, out of nowhere, the fish made its way through the water, erupting on the surface with a gulp of air declaring victory was nearly mine. I bundled the now tired carp into the net and knew instantly it was another 50-pounder. As I hoisted it up to meet the scales, they settled on 57lb 6oz. A true autumn whacker! 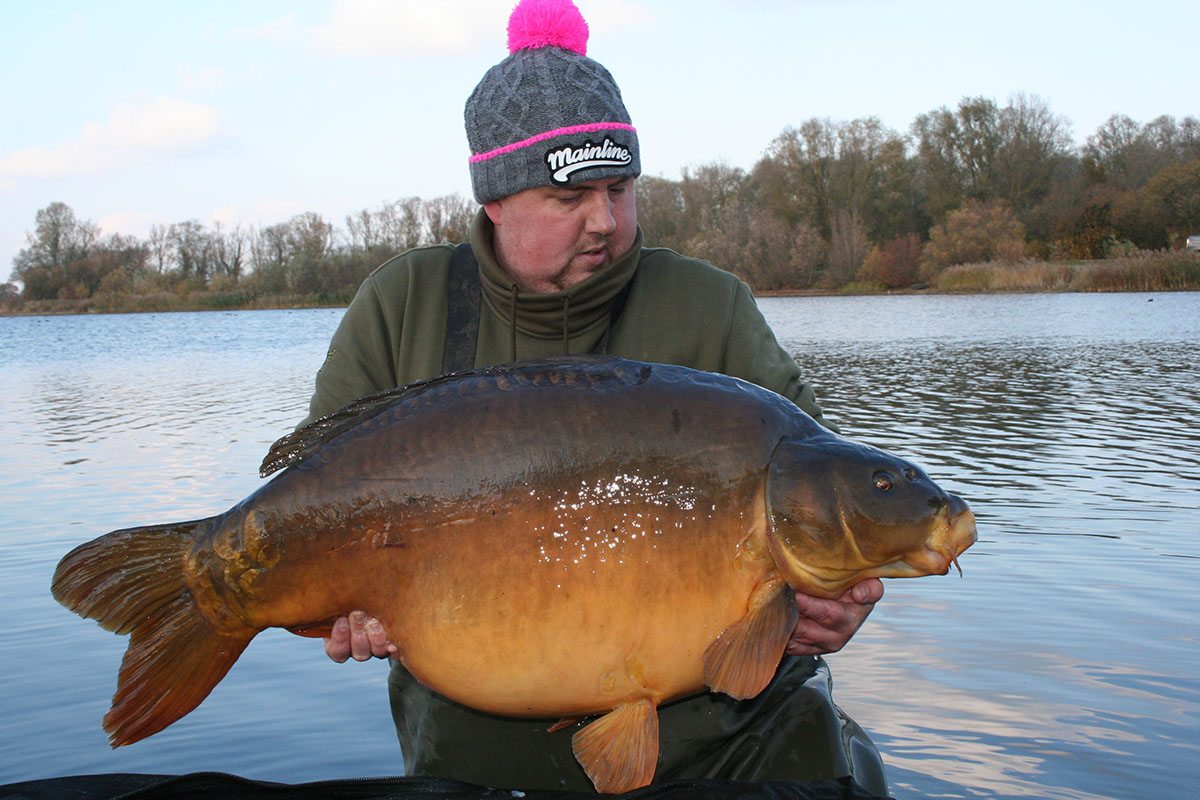 Could it get any better, the second bite resulted in this mega 57lb 6oz.

Buzzing with excitement, I was aware I still had a few nights left so I recast all the rods back to the spot and just before dark I topped the zone up with a further 10 Spombs of The Link and particle mix.

The night had barely passed when I was woken to an incredibly fast take at 1am and after a very lively battle a low-20 mirror made its way into the fold of my net. With temperatures hovering around freezing, I was quick to return the fish and reposition the rod before retreating to the confines of the bivvy to ignite the stove for the first brew of the day.

I sat watching the water and dozed in and out of sleep for a few hours when another take resulted in another clean and sprightly 21lb mirror.

As steady as the action had been coming, the next 24 hours fell deadly quiet. As you do I sat thinking about what was happening out on the lakebed. Had I been cleaned out? I didn’t think so. Had I been done? I had no reason to believe that. So, I baited very lightly and did what carp anglers do best and wait it out!

The next take came around 7pm on Friday evening and I soon found myself cradling a 36lb 11oz mirror. I slipped it back after a couple of quick photos and got the rod back out on the spot along with another five Spombs of bait. The action soon began to pick up once more and I had another take in the night which resulted in another mirror of 33lb.

Like buses the thirty pounders just kept on coming and at first light on the Saturday morning I was welcomed with another mirror of 31lb. I was due to meet a few friends who were fishing in neighbouring swims, but was keen to push my luck so I decided to have a recast before I would have to reel in and leave for a cheeky pub lunch later that day. Hoping for a quick bite, I topped the swim up with 10 Spombs and in a matter of hours a 48lb 10oz mirror was in the net. 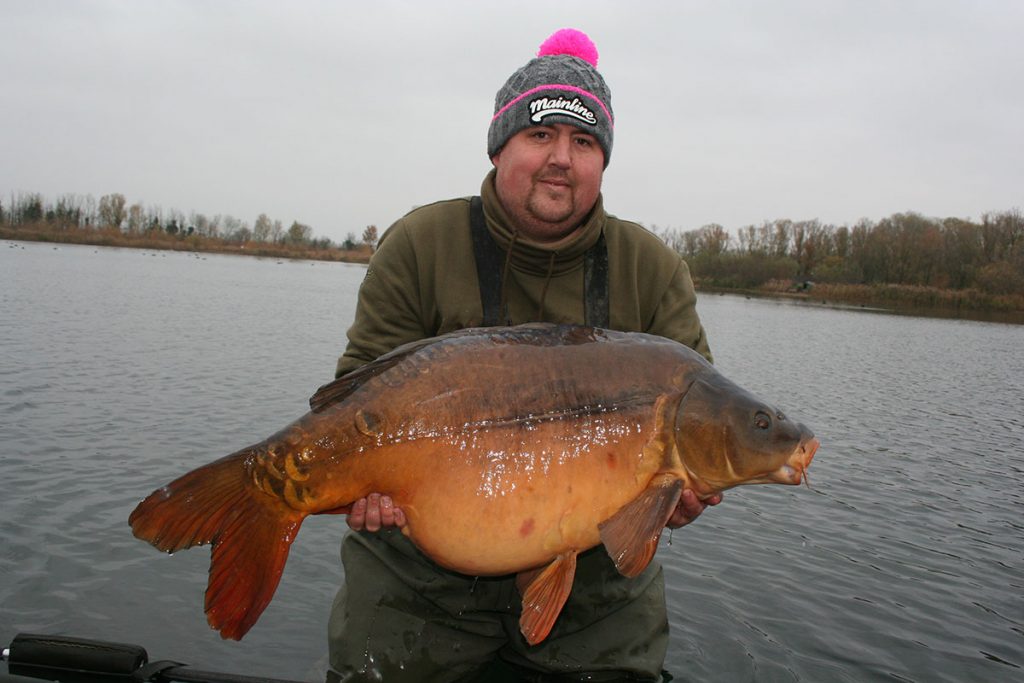 A chunky set 48lb 10oz mirror, could it get any better?

Over the moon and feeling pretty happy with myself, I reeled in the rods and headed for the warming shelter of the nearby pub. After a few hours away from the lake, I arrived back at the swim and wasted no time attaching fresh hookbaits, checking the rigs and getting the traps set for what would be my final night.

No sooner had the ripples from the three casts settled on the surface I deposited 15 Spombs over the spots.

The afternoon came and went and under the cover of darkness I sat confident that it would happen once more. I was right! The last take of the session came at a little after 8pm and what a cherry on the top it turned out to be. My final bite was another Holme Fen lump and all 53lb 10oz of it glistened in the moonlight as the final trophy shots were taken.

I packed up on the Sunday morning a very happy carper. Sometimes everything just goes to plan and this was that session!

Well it did get better and the final fish of the trip was this 53lb 10oz mirror,
it certainly made it a session to remember!