There is a date in the calendar that I look forward to more than most. On and around June 9th I cross the channel in the hope of landing one of the biggest commons in the world. Lake Serene is the venue, in  north eastern France’s Champagne region.

Serene is a very mature 16-acre gravel pit. It has everything; small weed beds, lily pads, an island, gravel bars, overhanging branches and big willow trees as cover. It’s an angler’s dream and throw into the equation a 90lb-plus common and you can see why the lake is booked out until 2022! 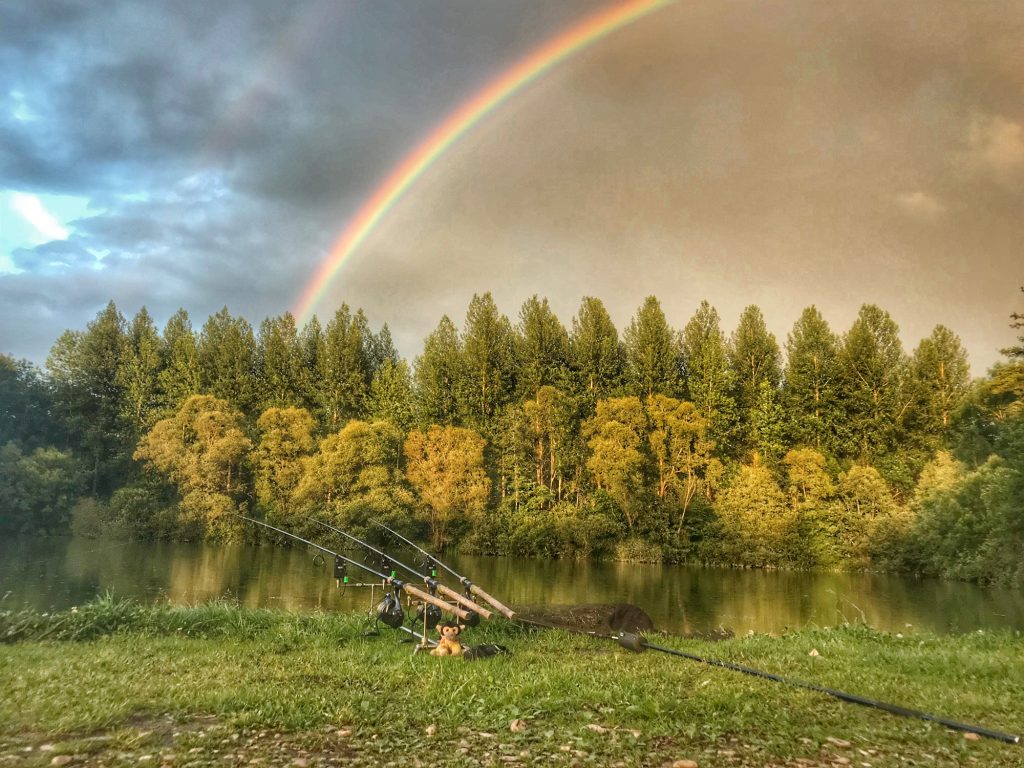 We arrived at around midday to be greeted by the owners John and Mav. We enjoyed a quick beer and were told that the fishing had been tough the previous week with some fish chasing each other and grouping up ready to spawn.

Your heart drops when you hear that word, with a week’s fishing ahead, but it’s nature dealing its hand and what will be will be. It wasn’t long until I was looking out into the swim I would call home for the next seven days. It was quite relaxed as we had already done the swim choices back home and I was paired up with the director of UK Bespoke Bait Boats, Del Sturrock. I have known Del for many years so I knew we were in for a good week even if the fishing was going to be challenging. We were in area of the lake which commands a lot of water, the back bay known as The Beeches and I plotted up on the right and Del was on the left.

Then it was straight out into the rowing boat armed with a long bamboo shoot ( French prodding stick) and a rod with just a lead to find some nice areas for the week. W

e would also be using one of the new bait boats from UKBB which is equipped with a Toslon 640 finder which tells you depths, water temperatures and can try to help you see what you are fishing over without disturbance , but i like  to try to get a genuine reading from a prodding stick or lead to find what would hopefully be some productive spots. I was finding the hard gravel then looking for the area where it met the soft clay. After finding some good areas in both sides of the swim it was time to set up camp and get the rods out.

Del was in action first on his margin rod short of the lily pads. It was 1.15 am on the first night and he was attached to a very powerful carp, but it came off around 15 yards from the bank. Del was so annoyed and I was gutted for him. To get a bite so early and  lose it was a real blow.

The next morning I got focused as after seeing Del lose a decent fish I felt I had to be on the button this week as bites may be scarce and I want to land every carp that I hooked.

With this in mind I went for my faithful slip D rigs incorporating the 25lb RM-Tec soft coated camo hooklink to size 4 Beaked Points paired with a 5.5oz lead fished drop-off style. 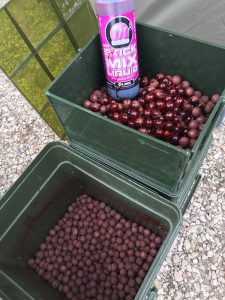 My bait of choice for the week was Mainline’s new Link. This is a boilie I have used for a year and had fish to 66lb so I knew it would produce here, plus the lake’s own bait is a red fishmeal similar in colour to the Link.

The first few days was quite hard but fellow RidgeMonkey rod Peter Carr, in the Gate swim, managed four to 54lb down the opposite end to The Beeches. It was Monday night when I received my first take and I went on to land mirrors of 44lb and 45lb. Plenty of bait had gone into the lake over the first few days but it was clear that the fish were not confident feeding over large patches of bait, so I decided to fish for one bite at a time. I started to introduce a small handful of crushed Link and the same amount of the lake’s particle mix and fished a wafter over the top. Hookbait choice was either a 12mm Link or Essential Cell wafter. The change in tactics worked almost instantly with a brace of mid-30lb mirrors. 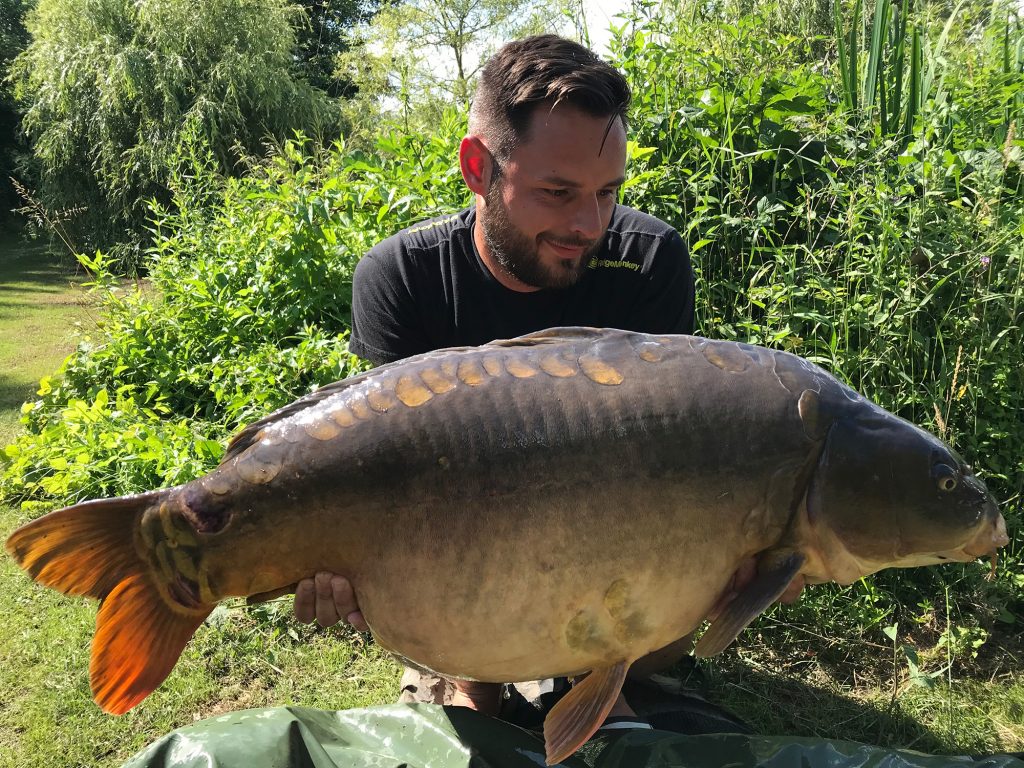 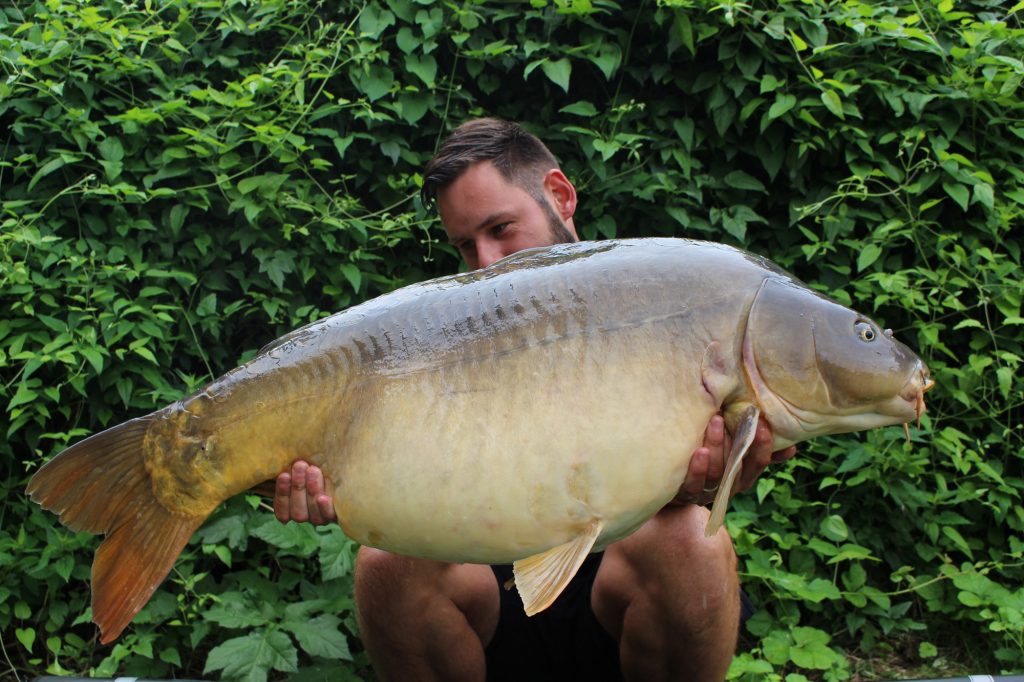 By Wednesday morning it was all starting to come together. My middle rod, tight to a snag tree alongside a small set of lily pads, produced another five bites, the biggest going just under 47lb. By Thursday morning I banked another four fish including my first 50 from the French water – 55lb on the nose – and the fifth venue since October that I had managed to land a 50-plus carp using the new Link.

I knew my baiting strategy was working and bites were becoming more consistent, but I didn’t increase the amount of bait going in. Even though I was getting bites it was just not working for the other lads that had put in beds of bait. I carried on fishing a scoop of crumb and a scoop of particle and Thursday became a red letter day with four fish, a brace of 38lb mirrors and a brace of 42lb carp, one a mirror and my first common of the trip.

I was up just about to make a cuppa while watching the mist rising from the surface when the left-hand rod went into meltdown. As soon as I picked up the rod I knew I was into a powerful fish. This is what I had been hoping for and my heart was going 10 to the dozen with thoughts running through my head that I could be attached to a 90+ common.  But, as I started to gain on the fish, my right hand rod proceeded to release a couple of beeps followed by a one-toner.  Del kindly picked it up and kept a constant bend in to it for me. I didn’t want to rush the first bite as I knew it was a good fish and after a couple of minutes I scooped the net under a very big mirror.

Del had kept the other fish on a tight line and steered it away from danger and I couldn’t believe my luck; I had one large mirror in the net and was now attached to another powerful fish. This one knew where all the snags and weed beds were and it was leading me a right old dance. I got it near my second net and thankfully, Del scooped it up.

I was elated. I called my old mate Gav round to help  with the pictures and weighing and what a brace it was. One mirror went 49lb 12oz and the other a 60lb 4oz monster. Serene is known for its big commons but, my gosh, the sheer quality and condition of these carp was incredible. I was now on 19 fish for the week and it had proved hard all over the pond.

The small parcels of food matched with small hookbaits attached to my Beaked Points really did the business for me and maybe went against the norm here. 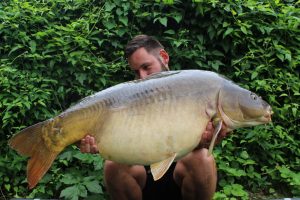 This trip really opened up my eyes. I have enjoyed an amazing year abroad, landing well over 150 carp in three weeks worth of sessions, and until this trip I had always gone away thinking I will use loads of bait to try to tempt them. But this week proved that if you use the right bait in the right quantities and paired that with a sharp hook you will not go wrong.

Obviously, location is the biggest factor but when you are away and you cannot move that is when confidence in your rig and bait choice is key.

I went to bed hoping that it would be big Fish Thursday and it was for two anglers on the party. I was woken up by Justin to ask if I could do some pictures for Grant in the Royal as he had his first fish of the trip and it was a 50. There were two new personal bests this night,  a 54 for Grant then one for Justin at 55. I was made up for Justin as he has been coming to France for a number of years and it was his first 50.

I got back into my sleeping bag happy for the two of them but disappointed my rods hadn’t gone. The conditions were perfect but little did I know what was going to happen just a few hours later. 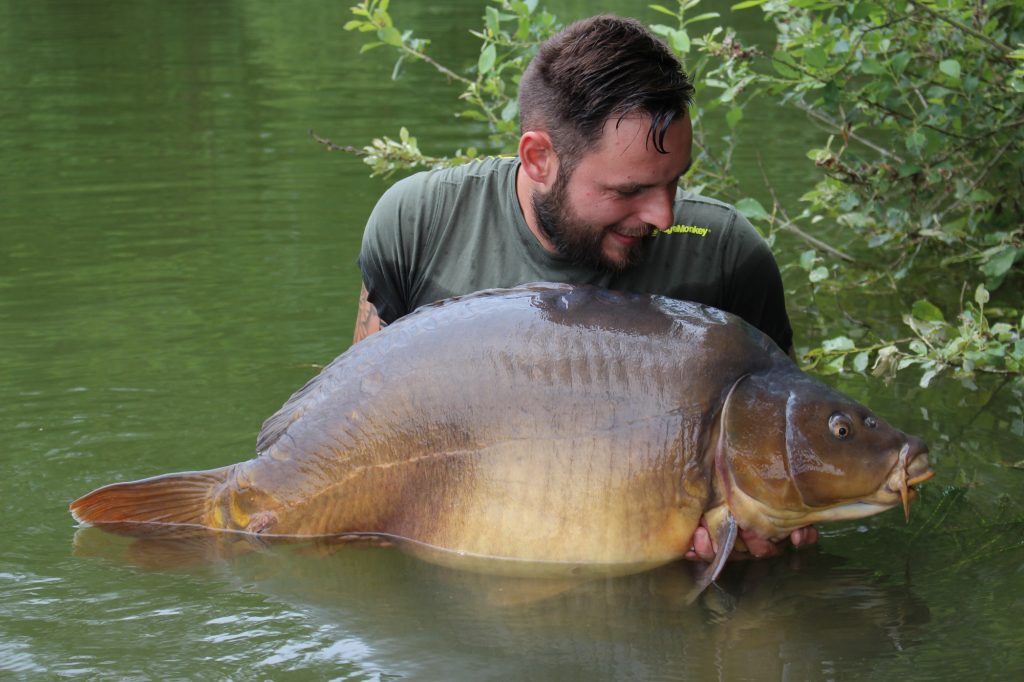