IN THE NICK OF TIME!
Part Four

Some time has passed since my last blog and a lot has happened since. Going back to early summer, I was still fishing my Essex club water (sorry, but it cannot be named). I fished most of the summer on here which was not as successful as I wanted it to be, my largest catch being a 23lb common.

Around the end of July, I knew that I would be pulling off this lake to venture to my old haunt, Golden Gates, to try for some of the 40lb commons it held. My first couple of visits to Golden Gates were very successful, I caught a few fish up to 28lb – luckily the lake was quiet. I was trying to fish as much as possible on the lead-up to a family holiday in August.

The weekend before leaving I managed to sneak in a 24-hour session which proved to very productive. On arrival, I started by having a walk to see what was about. I managed to spot some fish in a swim called The Rope. There were fish rolling and bubbling everywhere. I knew this swim well and that helped me decide exactly where to cast. I did my usual baiting routine which is half a kilo to a kilo over all three rods. One take in the first hour resulted in a 27lb mirror and later that night I had a further two bites but these were both small commons. My 24 hours were soon coming to an end and I was not hopeful, however, I did manage to catch another mirror of 24lb. That left me feeling confident in my fishing, but I was now going to be away from fishing for two weeks.

I had an amazing holiday in Mexico and returned feeling relaxed and ready to pick up where I left off.

Before I reel off my catches for the rest of the summer, I will just let you know what methods I use as they are pretty much the same each time. My end tackle is all from the RM-Tec range from RidgeMonkey which includes a size 6 Beaked Point hook and a 25lb soft coated hook link in either green or camo. My go-to rig is called a shrink back blow rig and I use it everywhere. My winning bait is the Cream Amino from The Bait Asylum which I have 100% confidence in.

Returning to my fishing, the following Saturday after my holiday I was back on Golden Gates and managed to return to the same Rope swim as before. The swim was not as active but I still felt confident that it was worth fishing. I was right to be confident as around 2 am the next morning I had a lovely bite from a 32lb mirror known as The Elusive. This also turned out to be a personal best mirror from this lake. 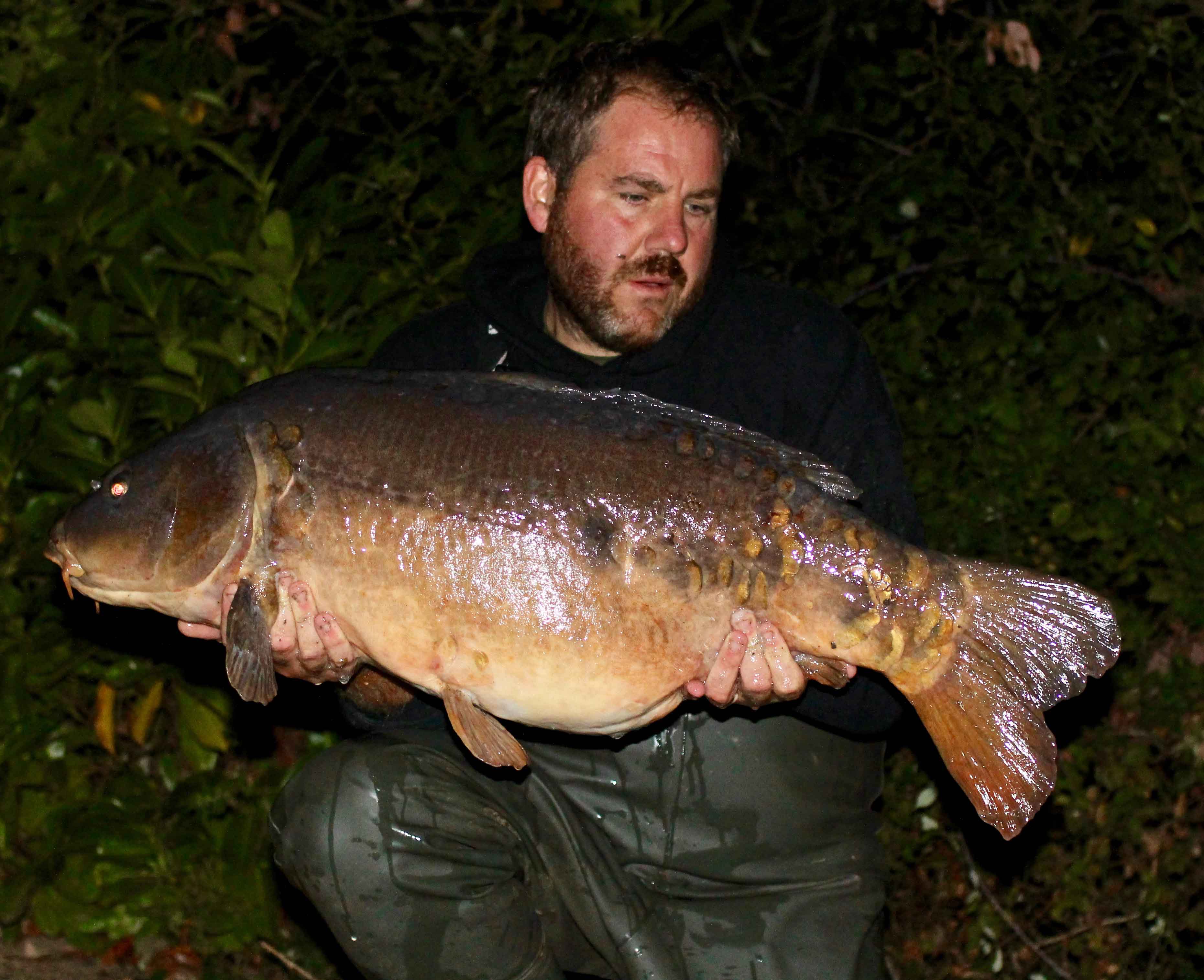 The elusive mirror at 32lb 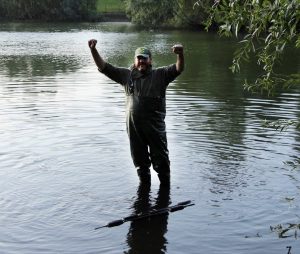 In September things really started to heat up. I had a plan to stick to a particular area called the Black Bags because, in previous years, the big commons were known to come out in this area. Within my first 24-hour session I had six bites, the biggest being a 31lb mirror. As you can imagine, I was on a high and felt like nothing could go wrong with my fishing. The following week I had a long session planned. I got to the lake on a Sunday hoping to get the same area again, which I managed to do. I did not see much fish all day but at around 8 pm, just as it was getting dark, I had one-toner off my middle rod. As soon as I picked up the rod I knew it was a heavy one. It gave me the run-around and I netted her at my first attempt. I shone the head torch into the net and could see that it was a massive common. I recognised it straight away as The Bulldozer. 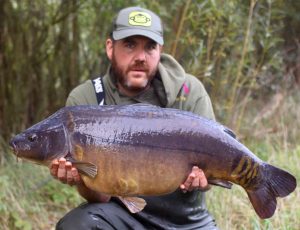 I got it up on the scales and it weighed in at a massive 42lb. I was straight on the phone to a good friend, Andy, and he was at the lake within 10 minutes to do the photos. That session went from strength to strength as I then took a further five carp to 31lb which included The Velvet fish which is a stunning creature. I had to leave the lake by 10 am as it closes every Monday for the lake to be baited. This seems to be a good thing as there are more thirties coming out than ever. 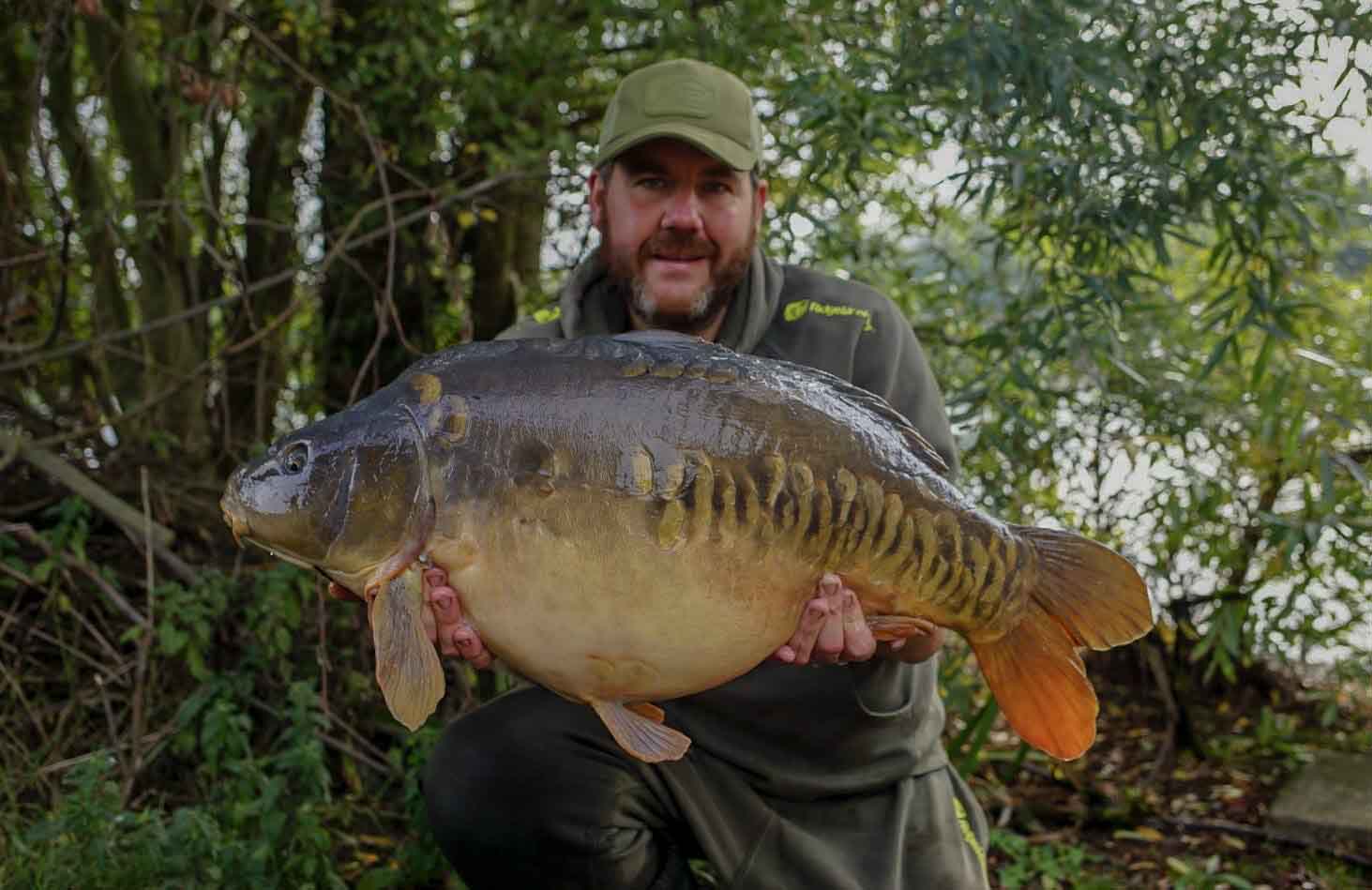 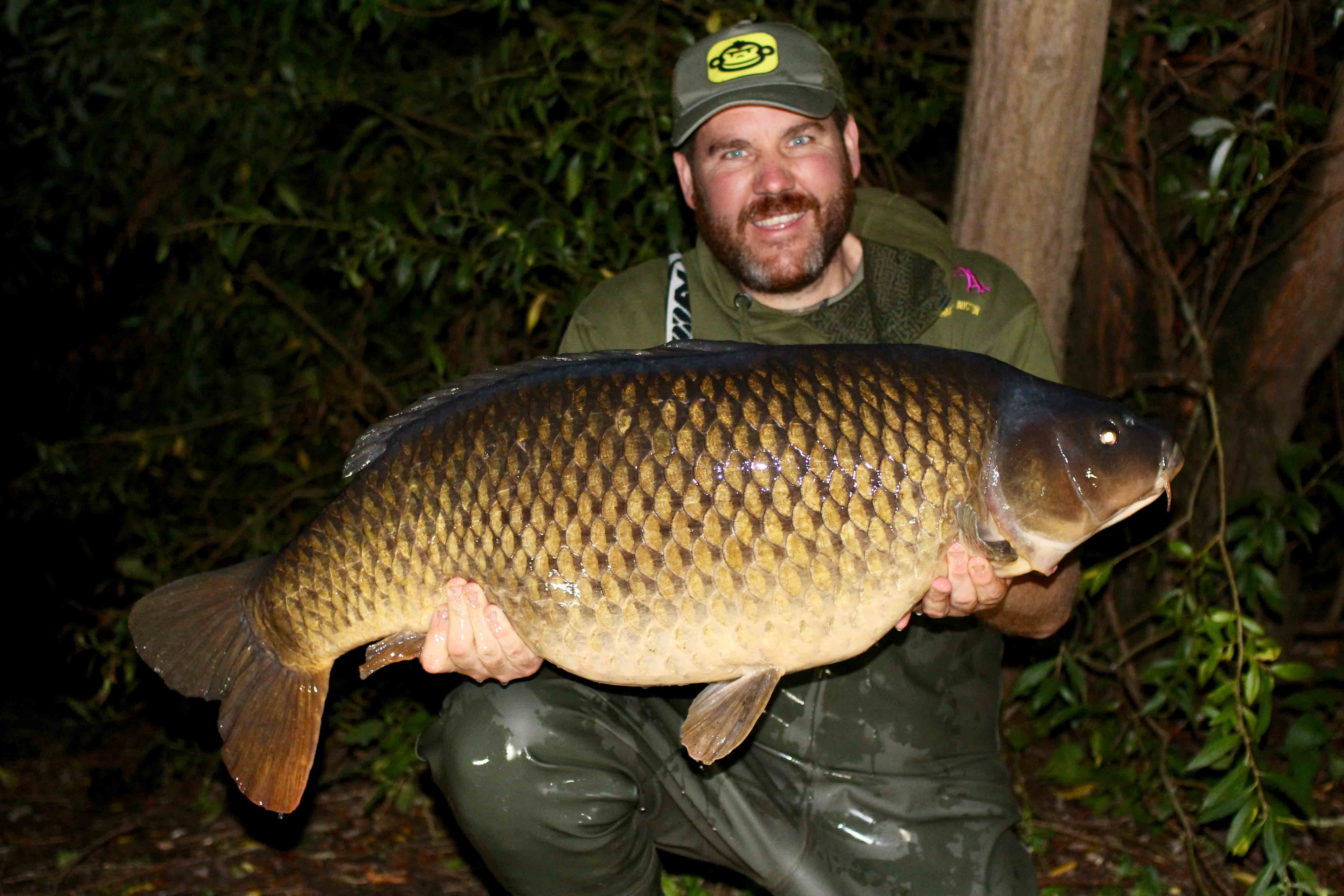 As you can imagine I was eager to get back to the lake on Tuesday for a further three-night session. On arrival, I noticed that there was no one there and headed straight to the Black Bags. I could see fish bubbling everywhere and within the first hour, I caught a 26lb mirror. Luckily, a friend was wondering around and was there to do the photos for me. As darkness set in I caught another stunning 29lb mirror. That just made my night. 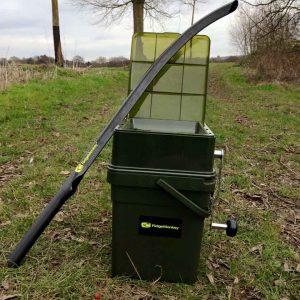 The following morning, I decided to put out quite a bit of bait. I spodded about 3-4 kilos of chopped boilie, which was crushed using the RidgeMonkey crusher. This is a great product for saving time to crush bait up. Later that morning I was accompanied by the RidgeMonkey film crew who was staying with me for the next 24 hours. That night turned out to be the coldest of the year so far. It felt like the pressure was on. It turned out the temperature did not impact the fish and they continued to feed. My first bite in front of the cameras was lost due to a hook pull. What made it worse was that it was the big mirror known as Black Eye. I was gutted. In the back of mind, I thought my luck had taken a turn for the worse now that the camera crew were here. But that was not to be the case, as, within two hours, I had two more bites which I landed. One was a 10lb common, the other a stunning 32lb mirror. Later in the session, I landed a further three fish for the cameras which included another 30lb mirror. You will be able to see this as the video will be coming soon to the RidgeMonkey website. 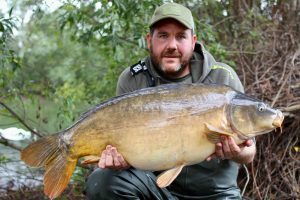 Once the film crew had left, I had one more night remaining. A friend came to see me for dinner on the lake. I was sitting thinking I could not have wished for this session to have been any better. While I was chatting, I had another take. I could not believe it as this turned out to be another 30-pounder. As the fish were really feeding, I decided to spod out a further two kilos of Cream Amino. While reflecting on this amazing session, I felt that it was winding down to a finish as I was leaving the lake the next day. Little did I know this was not the end of my lucky streak. At 1am one of the rods was away again. It felt heavy when I lifted the rod and it weeded me a couple of times and I did think that I might lose her. Before I knew it, I had her out of the weed and netted her at the first attempt. It was one of the 40lb commons known as Grant’s, weighing in at 41lb. After putting her back and putting the rod out, I struggled to get back to sleep as I was on such a high. To my surprise, by first light the same rod was away again. This time the fish made me work hard. She kept low in the water and made me chase her in and out of the weed. I netted her and to my surprise, it was my third 40lb common from the lake, known as The Silver One and she weighed in at 40lb 4oz. I could not believe my luck. I was amazed to have caught two of the big forties but to catch three was unreal. I was on cloud nine, you could not make it up. 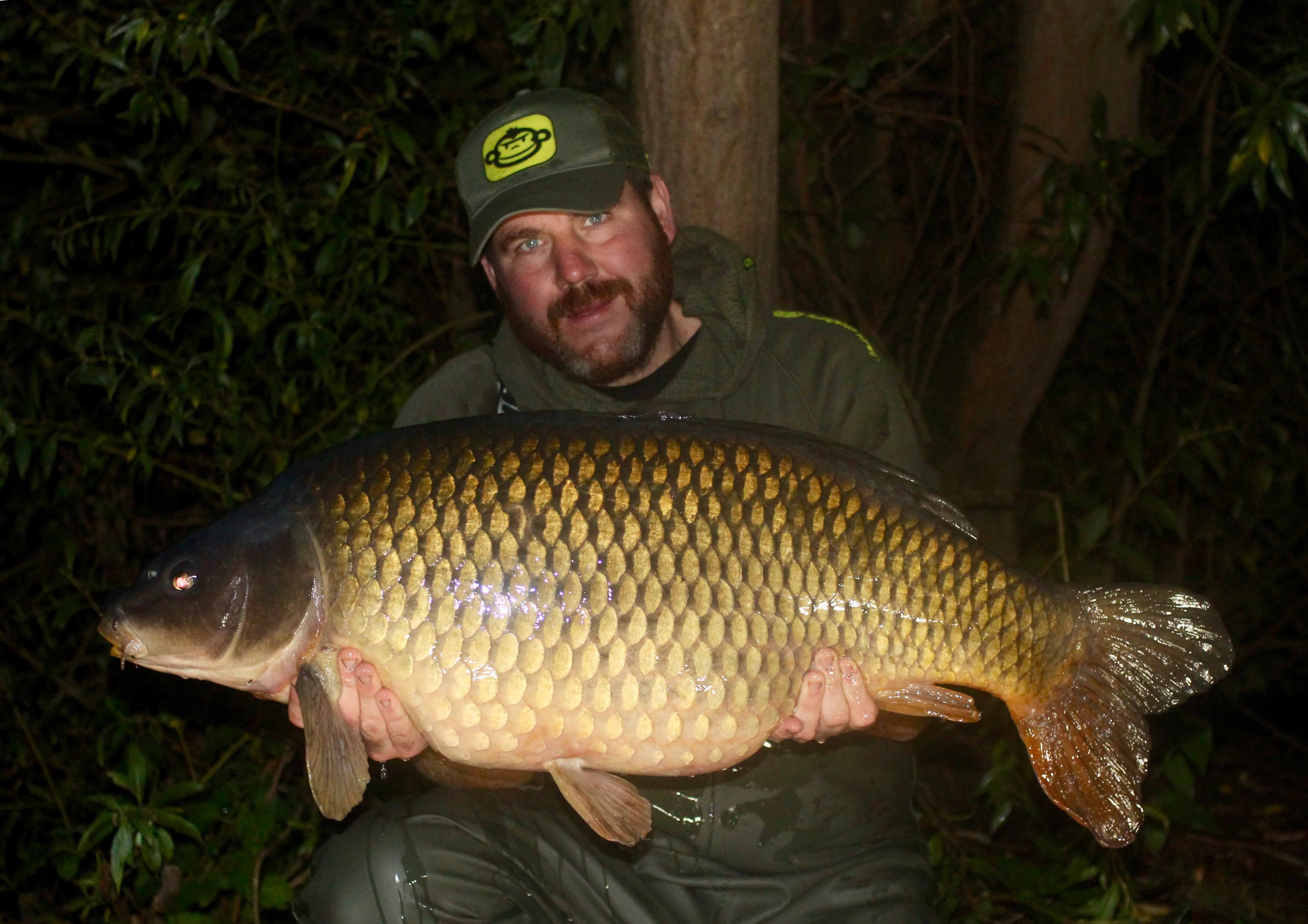 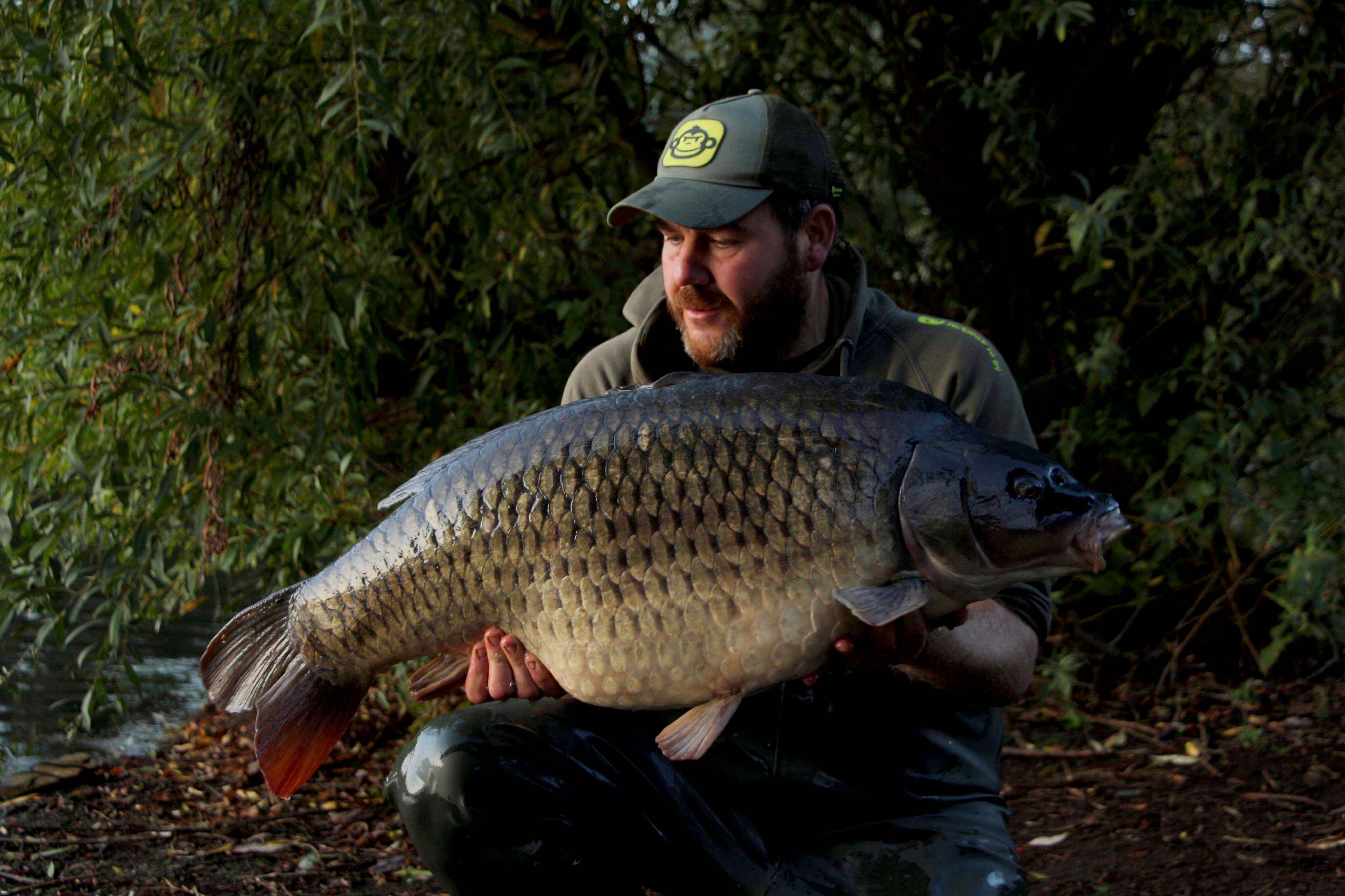 To summarise, in the four-night session I had a total of 18 takes and banked 17 fish. My confidence was flying high, not just in my fishing but also in my end tackle. The RidgeMonkey Beaked Points and The Bait Asylum’s Cream Amino boilies had not let me down once.

I have moved away from Golden Gates and returned to my Essex club water and it seems that my luck is still continuing. I will tell you more about that in my next blog.