Waves battered across the open irrigation lake and 20mph winds felt more like 60. But, a mid-November warm southerly could only mean one thing, big carp!

Scheduled laps around Berners Hall, a day ticket water in

Essex, were in order to get my bearings, but, as the clock spun round, I was still unsure about what to do. That feeling of excitement returned as a few good fish nutted out leaving an explosion-like sound in the whistling wind.

The fish I had seen were fairly scattered. Being a lake of 20-plus acres you would think location was crucial, however the carp moved continuously, so, for me, the spot I chose had to be just right. Eventually settling on an area that controlled a big sheet of water, I immediately got to work. A bare lead on a braided spod rod was cast around the swim. I soon found a couple of thick weed beds – an underwater jungle for the carp – and between the two was a clearing that the lead glided across. I thought better be safe and certain so I looped on a grappling lead and cast it to the same area. I noticed that what came back on the lead contained millions of shrimp and natural food. It was perfect for a bite.

Due to the weather conditions, I fished at a shorter range than usual, allowing me to cast and bait accurately without the hassle of a big crosswind absorbing my lines at 100 yards and taking them away from the spots. Because it was a small area the rods were positioned as close as possible – I’m guessing around just half a foot apart – perfect for some tight baiting of crushed tigers, corn and my ever faithful Mainline The Link boilies. 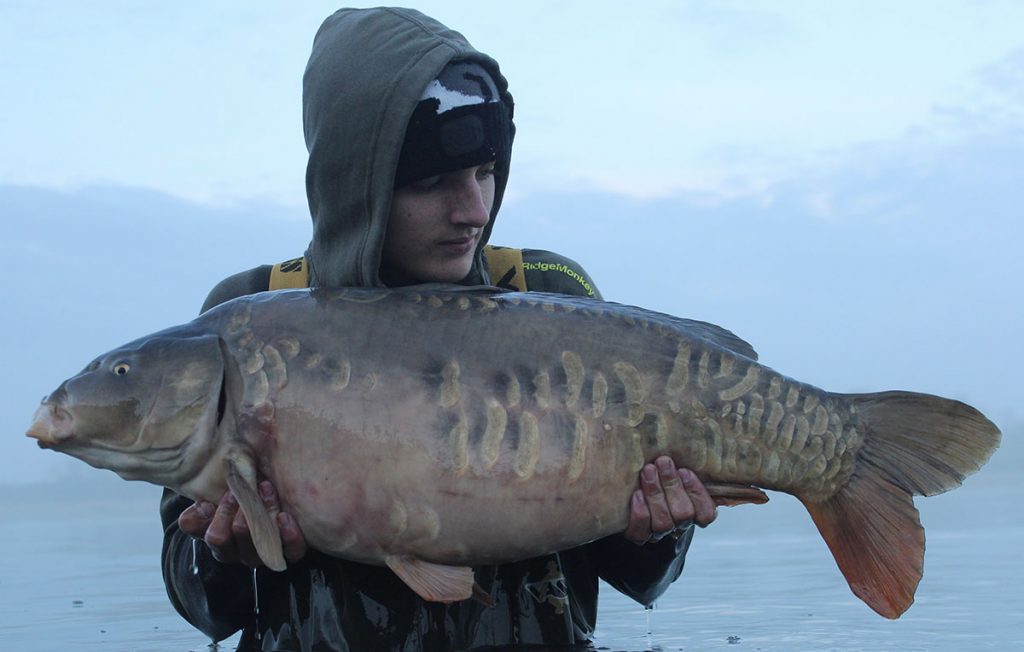 First light bite resulted in this 32 and a half mirror.

It was just 15 minutes after getting sorted when a rod sprung into life, the old SS3000 spool was spinning like a yo-yo as I ran down the muddy slope and lifted in to what felt like a heavy fish. I was being battered by wind and rain while my tight clutch was still clicking as the fish motored. Slipping and sliding, I placed the net in position, the fish made one last charge and then it seemed to just wallow. I didn’t need asking twice as I scooped the net up. Dropping the rod I peered into the mesh, a big common gulped like a pig on a farm. Three Spombs later the scales were eventually lifted; the needle was bouncing around, my dad mumbled as he gazed at the Reubens.. “37, hold it still..37.08”.

I was made up with the session, even though I still had two nights left. Slipping the fish back and watching it shuttle off I couldn’t help but be greedy. I wanted one more special one. Sharpening up another rig that consisted of a 12-inch length of 25lb RM-Tec Stiff Coated Braid tied multi rig-style with a size 2 Curved Shank hook, I thought ‘that will do’ as I cast it to the area and felt a soft thud. A short while later my alarm signalled another take. This time, however, it wasn’t to be and a hook pull in the dense weed left a bit of a scar. Donk, it was on the spot yet again, however, because by now it was dark I couldn’t say if it was right on the money. 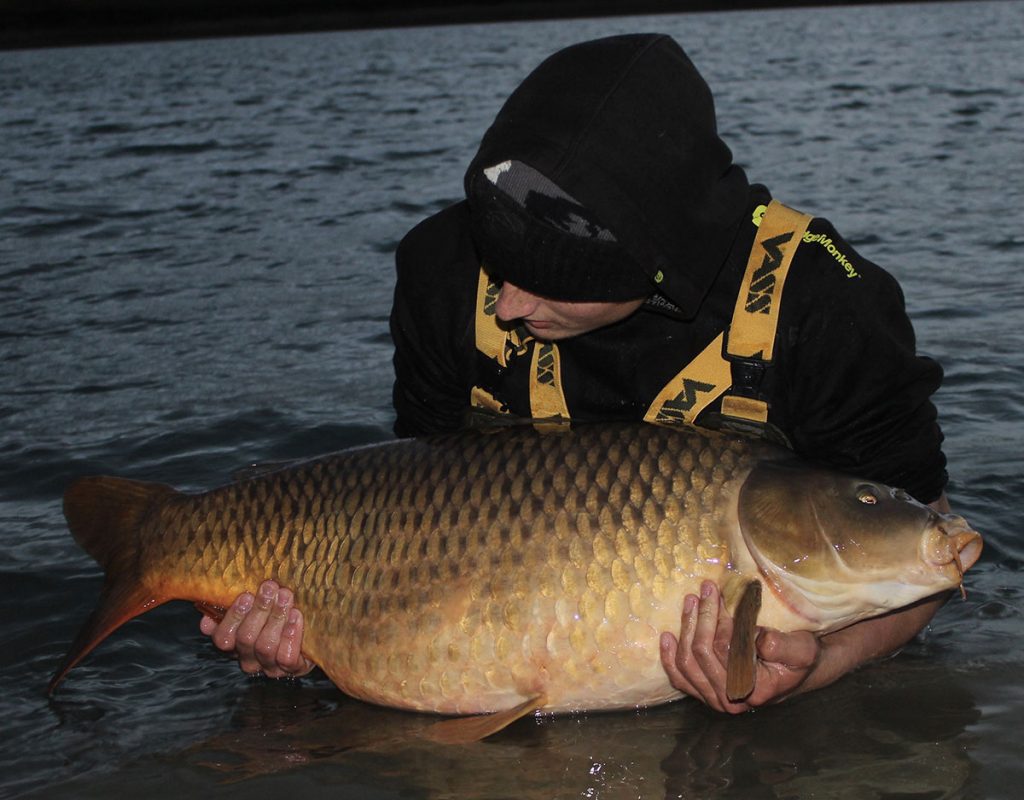 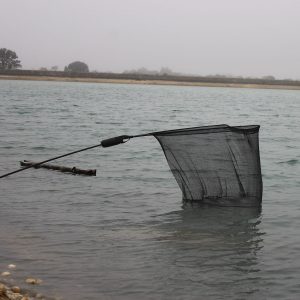 As dawn broke a soft mist rose from the water. Shattered but determined, I climbed over the letter box of the overwrap to prepare for another day of angling. It felt like a new climate, a bit of warmth to the sun and a dead calm lake made it somewhat eerie, but breaking the silence was two Fox alarms, both of which were mine. I think it would be fair to say that it was turning out to be one of those sessions when all seemed to go as planned. I’m not going to bore you too much as I’m sure you’ve all read stories of red-letter sessions. But to date this session had to be the most productive and most interesting to write about. Walking back to the van I was chuffed to end up with eight fish, two going thirty-plus!

I cannot emphasise how important it is to find the right spot. It’s all well and good finding fish in an area, but there is always a spot that will buy you those extra bites. I rarely change my rig mechanics and components as I use products I can rely on and that I feel give me the best chance of hooking and landing my quarry. Subsequent testing with the RidgeMonkey range has proved that and I rarely feel the need to change.

So, until next time, get out there, put the effort in and do what you love.